Next up is Ron Wolf's team:

The safeties match, Dillon a right safety and Robinson a player who played both. He was a left safety early in his career and finished as a free safety. The tackles fit perfectly. Joe Greene was a left tackle, a run stuffer who could rush, Lilly was a right tackle, a slasher who could rush well and could play the run. The ends are both left ends. Jackson a crushing run stuffer and Marchetti a rusher who played the run on the way to the quarterback. One of them could project to the other side, Jackson, in fact, played the right side for a couple of years, but he really licked right-side speed. he fit the left much better. Ted Hendricks is one of the rare players who could play a lot of positions and DID.

He played ROLB and LOLB in a 3-4 and also played RLB and LLB in a 4-3 scheme, all at top levels. Tippett was a 3-4 outside linebacker and a left defensive end on passing downs. Like with Joel Bussert's team he has to project into a 4-3.

This is a well-balanced offense with a good blocker at fullback and at tight end. It has a great Qb and deep speed at wide receiver and the line works. Well done. 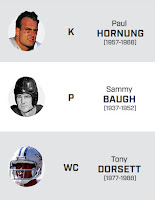 Baugh is a fine pick but I am not a fan of Hornung as a kicker. Even for his era he usually wasn't an accurate kicker with only, really one good season.
Posted by John Turney at 4:19 PM