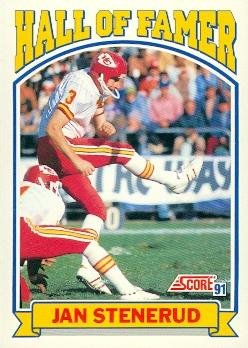 With each passing year, it seems the NFL's kickers and punters break records for their positions. Fifty years ago a fifty-yard field goal was something that happened maybe a few times a season. Now it happens a few times every week.  Today, kickers have a kicking percentage for 50-and-over attempts that would have been not only acceptable but excellent for all the kicks in a season.

Right now there are nine kickers in the history of the game that have a 70% or better success rate on attempts of 50 yards or more and 46 who have hit fifty percent or better.

For a comparison, Tom Dempsey, who had one of the strong legs in league history was 12 for 39 (30.8%). Jan Stenerud, a Hall of Fame kicker was 17 for 64 (26.6%) and those two were among the very best in long range field goals when they retired.  This is no reflection on them, it's just a fact that the kicking game in the NFL has really upped its game in the last couple of decades.

This is a list sorted by the most 50-yard field goals made:

This chart shows the top long distance kickers as of the end of the 1979 season, Dempsey's last:

Players with an asterisk played in the 1950s when complete distance data is not available. For instance, Lou Groza had at least 4 kicks of 50 or more, but it is unknown how many he missed.
Posted by John Turney at 11:18 PM