Some players sustain their greatness for long periods of time, like Walter Payton for example. Others, like the Tyler Rose, only had about 3½ seasons of greatness and some other good years.

From the beginning of 1978 through the first six weeks of 1981 Earl Campbell had rushed for 5779 yards with a 4.8 yards per carry average. His per-16 game average was 1778 yards and 15 touchdowns. It was about as good as you could find. Here are a couple of examples:  Jim Brown, after 52 games totaled 5370 yards and Eric Dickerson slighty outdistanced Campbell with 5877 yards in his first 52 games.

However, there a wall was hit. His running style punished defenders but also took a toll on his own body. From week seven of 1981 to the end of his career his 16-game average was 921 yards a season and a 3.7 yards per carry average.

Here is a chart showing the most rushing yards after 52 games. (Interestingly Ezekiel Elliott is on the list even though he's only played 40 games. If he tears it up in the first 12 games of the 2019 season he has a chance to crack the top 5 on this list. 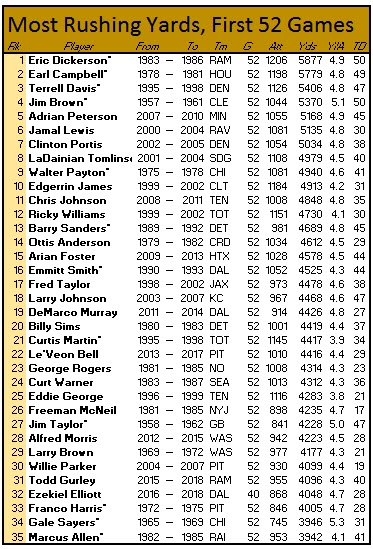