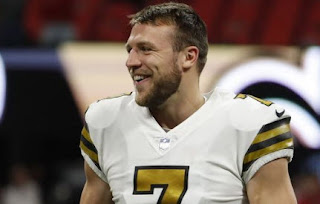 2019 gave us a lot of entertainment and part of that was the emergence of a handful of 'slash' players that played more than one position.

Taysom Hill was the leading 'slasher'. he played quarterback, receiver, runner, tight end. He had great speed and quickness.

Also entertaining is Patrick Ricard, Baltimore's resident fullback/defensive lineman. The Patriots, who have a history of these guys (Troy Brown WR-DB, Mike Vrabel, LB-TE, Julian Edelman, WR-DB, Rob Gronkowski, TE-S), had linebacker/fullback Elandon Roberts this year and who may have the quote of the year when talking about his football mindset “I run through a motherfuckers' face. Offense, defense, special teams, whatever you want,” Roberts explained. “I think that’s why Bill likes me.”

George Fant is a tackle, but plays more as a tight end in their heavy personnel.

Back in the day players like there were abundant. Then the era of specialization crept in and there were few. On occasion one would slip in—WR-DB James Owens and then WR-DB Roy Green. Kordell Stewart may have been the best, he was a QB-WR. Dan Klecko, like Ricard, was a FB-DL.

The Rams Mike Furrey actually converted to FS for a year before moving back to his usual Wr position. Patrick Peterson and Deion Sanders were star corners and played wide receiver as well.

There are others, but it seemed to us that the four we mentioned had pretty ig impacts on their teams and it was more than a novelty with them, it was part of what they did on offense and defense, i.e. part of the scheme. And that is entertaining in the NFL which can become dry sometimes.
Posted by John Turney at 4:54 PM