As we've posted about before there is always confusion when it comes to pressure stats, especially recently. There are analytic website competitors all doing their own thing.

Let's look at Za'Darius Smith who is having a tremendous year. We didn't pick him All-Pro because three others rushbackers (edge rushers) of whatever one wants to call them also had great years. We went with Chandler Jones based on a few factors among them game-changers (forced fumbles) and what he did was with less help than Shaq Barrett, TJ Watt, and Smith. However, no choice of any of those four can be 'wrong'.

Some have picked Smith, and that is fine. Among the rationale is that according to some sources his total pressures or disruptions were top in the NFL. And that's fine, too.

But back to pressure stats, here are some examples of the prose and stats of various sources, worthy work by all. 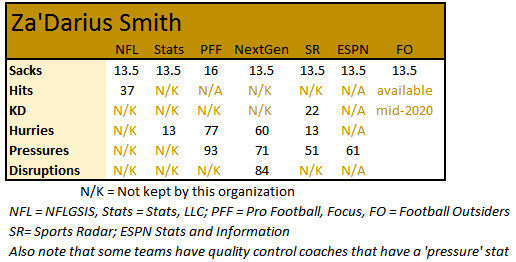 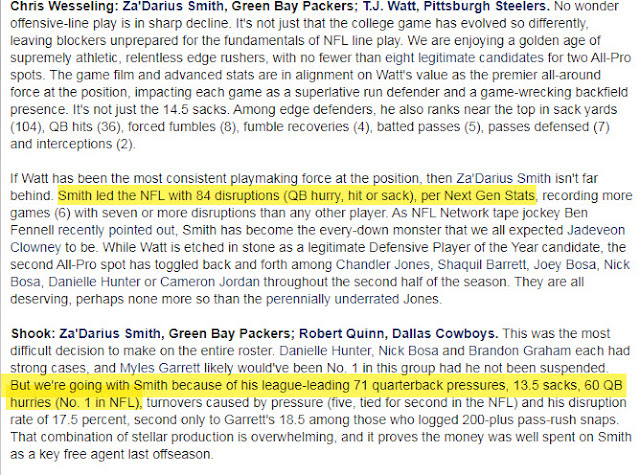 But, did you notice anything? We did, as we always do and have for a long, long time. It's that the hurries and pressures and disruptions are quite varied. All subjective stats are to one degree or another.

So, in terms of our "snubbing" Watt or Smith, maybe, but we DID look at pressure stats, but also we didn't discount sacks and what happens on a sack, the ball can be pulled loose, the clock keeps running, very important near the end of a game, there is loss of yardage.

So, pressures are important. Super important. In 1993 we interview Deacon Jones who said, "I'd rather have 40 pressures and no sacks than 2 sacks and no other pressures. If I am in your ass 40 times, you ain't going to win." And he was right. We've known that even before that interview, but we also don't want to get unbalanced the other way especially with the "accounting methods" that are clearly different from organization to organization.

We think Deacon, of course, was right. We've researched this subject since the 1970s and 80.s The Rams were among the first team to track hurries. The Bears also did some years. The Colts were the first team we saw keep track of them in the late-1950s in the Weeb Ewbank era. So, we are very familiar with this subject. All these other groups are, frankly, Johnny-come-latelys.

So, on with the countdown.

NFLGSIS tracks QB hits and it included sacks—unless you forced a fumble. Then, it's not a "QB hit" and technically that is accurate. However, what is the point of a pass rush? Isn't a forced fumble the ultimate? No, you didn't "hit" the QB but you gave your team a chance at a turnover. It needs to be considered or at least explained.

The same is true for tackles for loss, but that is a story for another day.

Pro Football Focus' total pressures are always higher than everyone else. We don't know how they count them but from Smith to Chris Long to Aaron Donald to JJ Watt they are always an outlier—to the point of being inflated but we cannot say for sure because no one knows what their criteria us for a hurry. They could be the best source.

Football Outsiders' totals always seasoned reasonable and match with my own work, but they don't come out until they release their almanac every Summer.

We believe them, their numbers seem reasonable, but where can you get them? You can only pick up snippets here and there.

ESPN Sports and Information is also a subscription service but one can find stats in ESPN posts. We have partial information for Smith—61 "total pressures".

Sportsradar's data is found at Pro Football Reference. Their numbers seem to be more in line with Footall Outsiders—they are not inflated and they are accessible without a subscription.

Then there is Stats, LLC, who has a ton of stuff behind a hugely expensive paywall. Some is available at some free sites, so you can get hurries from them.

Some teams keep this data and put it in their weekly Game Releases. The Packers used to, but now they don't or we'd have a eighth source for 'pressure' stats.

So, who is right? No one. Who is wrong? No one. It's judgment calls on hits, hurries, pressures, and disruptions.
Posted by John Turney at 3:00 AM