Richard Seymour and Bryant Young—Do Complete Linemen Who Stopped the Run Have Shot at HOF? 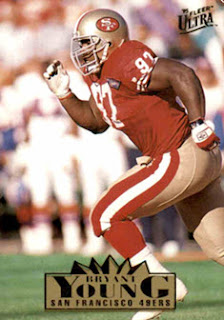 It was a pleasant surprise to see Richard Seymour and Bryant Young on the Hall of Fame Final 15 list that was recently released. We think both are worthy and hope they would go in right away since we think they are two of the top give football players on the finalists list. Of course, the voters likely don't agree. But, it is a step forward to be on the Final 15, so we think both, eventually will get in.
(click to enlarge)

Young was not a flashy defensive tackle, he was a grinder, a solid guy who made big plays without a lot of noise or hoopla. He finished his career with 89.5 sacks, only seven behind renowned pass rusher Warren Sapp and he finished with 82 run stuffs—more than Sapp.

Young was a left defensive tackle and as such had to play both 1-technique (on the shoulder of a center) and 3-technique (on the shoulder of a guard) depending on the strength of the offense and the defensive line call (over, under, etc) so he had more responsibilities than someone like Sapp or John Randle who only played the three-technique. (Of course, there are exceptions to these but for all intents and purposes Young played both techniques and Randle and Sapp just the three-technique).

In that way, Young was a Merlin Olsen/Joe Greene type of tackle. He wasn't going to get 16 sacks in a season but he was not going to get caught going too deep on a pass rush and leaving a crease for a draw or trap play. He was always going to be responsible for his gap assignment, and also was able to beat double teams when he had to play 1-technique and getting a good rush (four times 9.5 or more sacks in his career). He was going to do it all.

Young was one of the all-time warriors, coming back from a devastating broken leg in 1999 to go to the Pro Bowl and winning the NFL Comeback Player of the Year Award. In our view, Young checks all the "boxes" we will see if the Hall of Fame committee agrees. 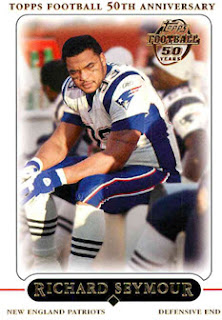 The same basic things apply to Richard Seymour as they do to Young. Seymour was a major cog of the Patriot defenses of the early 2000s as a defensive end in base defense and as a three-technique in passing situations, though you'd see Seymour over the center some and even outside on some passing downs.
(click to enlarge)

Seymour was a player who had "length"—a modern term for a tall player with long arms. Seymour had great strength and with his body time played with good 'base' or leverage. Seymour was a member of the 2000s All-Decade Team was a Pro Bowler seven times and a three-time All-Pro and did so in different schemes and at different positions. And oh, by the way, has three 'rings'.

The stumbling block for some voters might be his stats, the "numbers". His 57.5 sack total isn't a big number, even for his position. But like Young, it was the quality of his play that was impressive the things he opened up for other players.
Belichick recently wrote a letter to the Hall of Fame voters stating, "Richard had a rare combination of size, speed, strength, and athleticism. Although primarily a defensive end in our 3-4 defense, Richard also played nose tackle. In the four-man line, Richard could play defensive end or defensive tackle depending on the situation and desired matchups." Belichick ended the letter by saying that Seymour was one of the top defensive linemen he ever coached.

So, in less than a week we'll see if one or both or neither of these studs make the Hall of Fame. We're hoping both, plus Polamalu and Boselli and Hutchinson. That's our wants. Our predictions will be different.
Posted by John Turney at 1:32 PM