There Are Three Offensive Lineman Up for the Hall of Fame—All Have the Credentials, Who Goes In? 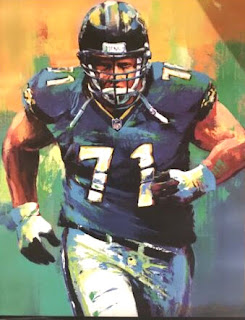 Sadly, the Hall of fame backlog at offensive tackle has thinned but not by induction, but by attrition. Joe Jacoby and Mike Kenn ran out of eligibility and are now in the senior pool leaving only Tony Boselli as the lone tackle on the  HOF Final 15. The Hall would be more complete with Jacoby and Kenn in rather than waiting.

Hopefully, Boselli will be inducted the day before the Super Bowl when the HOF committee meets.  He has the credentials, but his longevity "box" cannot be checked because his career was cut short by injury. But with players like Terrell Davis and just a week ago Jimbo Covert being inducted with their injury-shortened careers, it bodes well for Boselli's chances.

Attitudes on the committee have changed since the 1990s when Dwight Stephenson was deemed unworthy by a small minority because he lacked longevity. Finally, in his sixth year of eligibility he was voted in, rightly so.

That leaves two guards who have been slugging it out. It seems reasonable to us that since Troy Polamalu is (according to conventional wisdom and Internet chatter) a lock and with Bill Cowher and Donnie Shell being inducted in the 2020 Centennial Class last week that Alan Faneca would now a longshot unless the Steelers voter and media want to be completely partisan and piggish.

With Faneca and Steve Hutchinson vying for (theoretically) for one slot, it seems that if there is no other way to order them or stack them, then Hutch should get the nod. We happen to think both have the credentials but that Hutch was the more dominant and had the higher "peak" but Faneca lasted a bit longer.

So, if all's well that ends well, go with the top guy first and then follow-up with Faneca next year. If they put four Steelers in, well, let's just say they might want some viewers from somewhere besides Western PA.

Of course, it's only our hope that two offensive linemen get in. It may not happen. The way skill players get all benefits of the doubt the linemen (see Jacoby, Kenn) have to wait and wait and sometimes never get in. It's a travesty since some of the best football players of all time are linemen.

We'd also hope one or two defensive linemen get in—Bryant Young and Richard Seymour are both worthy but our feeling is that Miami will freeze over before they put four linemen (two offensive and two defense) in the HOF the same year even if they are four of the top football players on the Final 15 (which they may be, if not that case can be made).
Posted by John Turney at 5:47 PM