LOOKING BACK
By John Turney
Luke Kuechly in an announcement through the Carolina Panthers stated he is retiring from the NFL. He's had a great run and recent concussions issues with head trauma one cannot blame him at all, his future health is paramount to him.

Will undoubtedly be All-Decade for the 2010s but vote for the official team has not been done but he's made every All-Decade team we've seen so far.

Nick Webster's excellent work in stuffs (run or pass plays stopped for a loss) show that Keuchly, in eight years had 82, an average of 10.3per  season, second-most since reliable gamebooks exist.

At 6-3 and excellent spead he proved excellent in stopping the run but also in coverages, especially in Tampa-2 when he had to cover tight ends through the 'hole' zone.

Here is how Kuechly's career number compared to other HOFers one would think even though he played just eight seasons he's done enough to get a Gold Jacket one day. 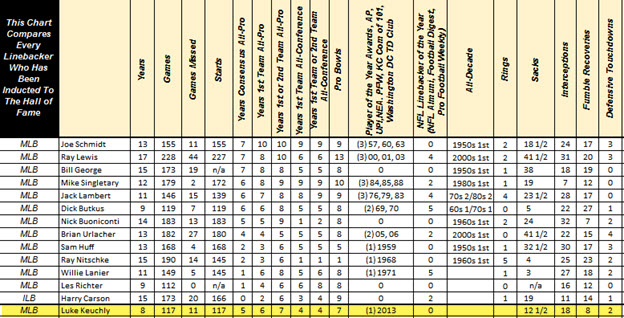