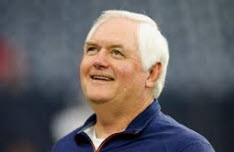 The Rams defense had three or so awful outings in 2019 but was also, on average, better than the 2018 defense that made it to the Super Bowl.

Phillips has had a long and distinguished career without a doubt. We do not know if he'll coach again or hang up the old waffle soul Riddells. But when you look at the teams he's been the defensive coordinator for or the head coach for, it is impressive.
(Click to enlarge) 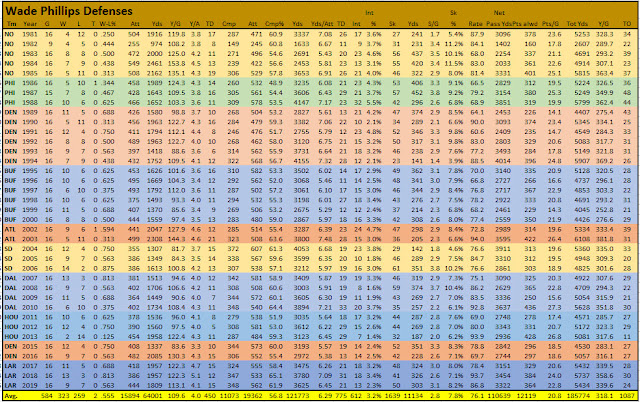 One thing is for sure, several times he's landed in the money. What do we mean by 'landing in the money'?

He was hired to run his father's defense with the Saint in 1981 and they quickly drafted Rickey Jackson. Then, in 1986, he was hired by Buddy Ryan to coach the Eagles. Who was on that team when Wade arrived? Reggie White. In 1989 he goes to Denver but he inherited (and improved the defense there). They didn't have a star like Reggie White but then he's hired to coach the Bills who have a defensive end named Bruce Smith on the roster. Then he had some good players with the Falcons and Chargers but when he goes to Dallas he has DeMarcus Ware. Next, Son of Bum goes to Houston who just drafted JJ Watt then to Denver who had Von Miller.

He then gets hired by the Rams who have Aaron Donald on the roster.

So, either he's the best defensive coach ever who developed these talented players into Hall of Famers or he's the most fortunate coach ever. Maybe both.