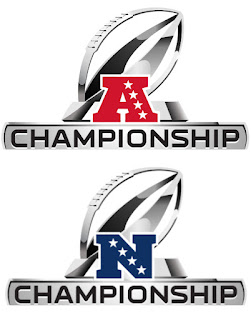 Three of the four seeded teams won at home last week, and no doubt the steam rolling Tennessee Titans believe they can continue to win on the road and advance to the SB. A quick look at the team stats from last weekend's winners tell us the following: the winning teams recorded 20 sacks and 3 interceptions (the losers 6 and 1).

The four winning teams completed 58 passes for 786 yards, an average of 13.55 a completion, while the losers completed 104 passes for 1,202 yards (11.55 a completion). Two yards makes a difference, and if you don't believe that gain 7 yards on 3rd down and 8 instead of 9 yards and watch your punt team trot onto the field. Sacks, interceptions, and yards gained per completion will be a major part of the winning teams formula this Sunday—yet historically there is an aspect that is the MOST IMPORTANT KEY TO WINNING.

We have had 98 conference championship games since the merger in 1970 and the team that has scored the first touchdown has won 74 times! Excluding the 1979 Ram victory over the Bucs (all field goals for the winners in the shut-out victory) the percentage by conference is as follows: AFC 38 of 49 (77.6%) and NFC 36 of 48 (75%). From 1970 through 1989 in the NFC title game the team that scored the first touchdown won every time (Ram victory excluded).

Since 2002 though the NFC has seen the team that did not score the first touchdown win 9 of the 17. The first team to score a touchdown in the AFC title game since 2002 has won 14 of 17. Ask the four coaches if they would rather have a 7-0 or 7-3 lead? How about a scenario to tie the above all together. The defense intercepts, and on the initial offensive drive gains 14 yards on completions; and scores seven! The clock ticks on and the team that is behind not only gains yards on short completions, they are forced to use time-outs, and finally the pass rush takes down the quarterback.

A 4th quarter sack is one of the most valuable elements of victory. Doubt that and Coach George Allen and myself will come and haunt/visit you. Finally, some of you just might remember where you were on January 15th, 1967?

The first title game clash between the AFL & NFL was memorable for a myriad of reasons, and this former Anaheim Colonist High School football player was glued, and I mean GLUED to CBS to watch the game (which was played in sunlight in the afternoon in Los Angeles). St. Vince and his band of Fox River studs came away with the silver trophy and no one at that time could envision what the game would become over 50 years later. Enjoy the games on Sunday.
Posted by TJ Troup at 4:49 AM