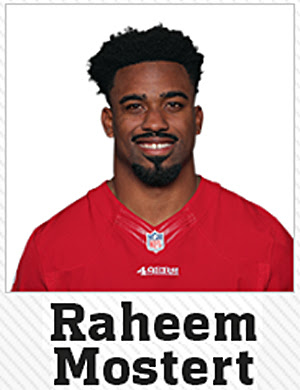 The 49ers deep run into the playoffs continues.

The Packers were the latest to get trampled as sprints to to face the Kansas City Chiefs in Super Bowl 54.

overran 37-20 Sunday at Levi’s Stadium. The 49ers more than quadrupled the rushing output of the Packers in laying claim to the NFC championship.

This was old school football. And carried the day.

By game’s end, the number of missed tackles by could well have reached double digits. The yards it surrendered after initial contact may have approached triple digits.

What had been billed as a three-headed rushing attack became a one-man show. Raheem Mostert exploded for 220 yards (29 carries) and four rushing touchdowns as amassed 285 yards on the ground.

collected a meager 62 on 16 attempts.

So effective were the 49ers that they required just nine passing plays. Jimmy Garoppolo threw eight times for 77 yards and was sacked once for a loss of eight.

But to call this an unbalanced attack would be unfair. If nothing else, it was balanced in that Mostert was seemingly always upright.

Mostert (772 rushing yards), Matt Breida (623) and Tevin Coleman (544) paced the 49ers during the regular season. led the NFC in ground gaining, and its 23 rushing touchdowns were tops in the league.

Coleman opened at running back Sunday, but a shoulder injury sidelined him early in the second quarter. By then, Mostert was in high gear. Breida played just two snaps on offense, carrying once for two yards.

When Coleman did not return, Mostert became the go-to back. His performance ranks among the most impressive in any playoff game against the Packers.

·    His 220 yards rushing broke ColinKaepernick’s single-game record of 181 set in 2013.
·    His four rushing touchdowns broke the previous record of three shared by Emmitt Smith, Terrell Davis and Shaun Alexander.
·    His 10 rushing first downs nearly tied the record of 11 held by Smith and Davis.
·    His seven gains of 10 or more yards is one fewer than the eight of record-holder Marshawn Lynch.
·    He became the first player to gain more than 100 yards rushing in a single quarter (113; second) against the Packers.

·    Run 11 straight times (second quarter) and 13 in a row (late second quarter into the fourth). The last team to run 13 straight times in a playoff game against was the Colts who did so on Dec. 26, 1965. was without its top two passers that day (Johnny Unitas; Gary Cuozzo), and started running back Tom Matte at quarterback.
·    Attempt no passes in the third quarter and join the 1938 Giants (fourth quarter) and 1944 Giants (first) as the only teams to produce pass-free quarters in a playoff game against the Packers.
·    Become the first team to utilize fewer than 10 pass plays (9) in a postseason game involving . The Bears (12) of 1941 had had the fewest.

So overpowering was that its offense needed just 51 plays to dispense with and move on. Only two clubs previously – the Eagles of 1960 (49) and the Redskins of 1972 (51) – had bounced the Green and Gold from the playoffs so expeditiously.

Extra Point
With 27, the 49ers became the 12th playoff team to nick for 20 or more first-half points. The Packers are winless when that occurs.

Most, Mostert, Mostest
Players who gained 150 or more yards rushing in a playoff game against the Packers.