A Look Back at the Top 49er Defensive Lines 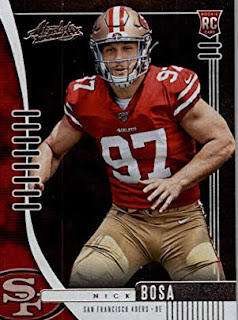 The current 49ers defensive line is full of number one picks and has been very productive in 2019. Where do they rank in the annals of the great 49e defense in terms of sacks?

Here is the list of most sacks in a season—

1976
The "Gold Rush" coached by Floyd Peters
Totaled 61 sacks and were good versus the run—by playing the run on the way to the quarterback.

1985
Oddly this was a year when Fred Dean (3 sacks) was not effective ad a year before Charley Haley arrived. The 49ers got 14 sacks from linebackers and another 4.5 sacks from defensive backs. It was rush by committee.

1983
Fred Dean led with 17.5 sacks playing on passing downs.  Dwaine Board had 13 playing right end in base 3-4 defense and moving to left defensive end in the nickel/dime.

1997
The 49ers got a huge push from Dana Stubblefield who was the Defensive Player of the Year. Kevin Greene came in and rushed as a designated rusher, a position the 49ers called "Elephant". In additon, it was among the best run-stopping defense in 49er history. The defensive coordinator was John Marshall.

1986
This was Charles Haley's rookie season and he took over Fred Dean's role and he led the team with 12 sacks. Jeff Stover usually was an inside rusher in the nickel/dime defense and he as 11 sacks. Dwaine Board was his usual solid self with 8 sacks and playing both in base and in sub defenses.

1984
Fred Dean held out until late in the season but the '84 49ers were still effective. Board had 10 sacks and no one else had more than 5 sacks. Gary Johnson had those five as a designated rusher. The 49ers got 13 sacks from linebackers and another 4.5 from defensive backs.

1998
Another unit managed by John Marshall. Dana Stubblefield left via free agency and Junior Bryant took his place. Also, Bryant Young suffered a gruesome broken leg and missed the final month of the season. Still, they recorded 51 sacks and again were solid against the run.

1967
The '67 49ers got good production from there outside linebackers totaling at least 15½ sacks from then and also the inside/outside pair of Roland Lakes (inside) and Hindman (outside) rushers. They totaled 48 sacks.

2019
Also totaling  48 sacks were the current iteration of the 49ers front but when you watch them they seem put more pressure on the passer than some of the teams we watched that are above them on this list. Opponents use lots of 6- and 7-man protections and get rid of the ball quickly to avoid sacks.

If they play to their potential they could lead their team to the Super Bowl.

Arik Armstead—A top base end, 54 tackles and 10 sacks
Nick Bosa—The rookie phenom, 47 tackles 9 sacks, and the most pressures on the line
DeForest Buckner—The three-technique, 61 tackles, 7.5 sacks
Dee Ford—Injured late in season, was the nickel rusher, 6.5 sacks in 11 games (2 starts)
Solomon Thomas—FIlled in inside and outside, 21 tackles 2 sacks.
D.J. Jones—was the starting nose until felled by injury


1972
This was Tommy Hart's breakout season. Linemate Cedrick Hardman broke out the year before with 18 sacks.