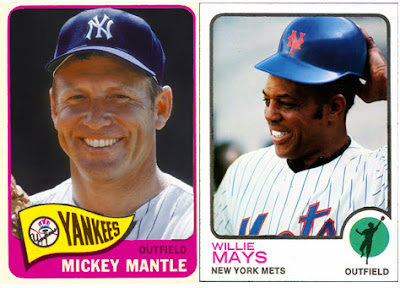 Everyone has favorites. As a kid mine was Willie Mays. And through him, I grew to love Mickey Mantle. Many years later I learned that Mickey drank too much and fooled around on his wife. He was a flawed individual.

Mantle also hooked up with Dr. Feelgood (Max Jacobson). Author Richard A. Lertzman wrote that Dr. Feelgood treated JFK and many New York and Hollywood stars with speed. He also told a Coach to Coast audience that he treated Mantle with both steroids and amphetamines. (Jacobson was an early pioneer in the use of steriods according to Lertzman).

What is missing (by his supporters) in the Tom Flores discussion is that that he had a lot of positives and ALSO some negatives and those negatives do affect his candidacy for the Hall of Fame.

The top thing is he won two Super Bowls. Also, he was a pioneer as a Hispanic coach in a league that had a history of racial bias.

What does not matter (since he's a candidate as a coach, not a player of player-coach combo) is that he won a ring sitting on the bench for the Chiefs in 1969. It keeps getting brought up and is what I call a True Lie—It's accurate but is it 'true' to the point that he's a HOF coach?

As for the negatives, all the coaches outside the Hall looking in have them. This group is hard to separate:  Don Coryell, Tom Flores, Mike Holmgren, Buddy Parker, Dan Reeves, and Dick Vermeil.

You can throw in Mike Shanahan, George Seifert, and Tom Coughlin as well.

Bill Cowher and Jimmy Johnson both got on over the above coaches. My personal preference would have been to go from oldest to youngest or from 2 championships to 1. But the committee disagreed.

Flores fans on Twitter are hopping mad. And I get it. However, they must look at the picture in toto.

Here are coaching records vis Pro Football Reference. A "check" is a winning season. An "x" is a losting season. Seasons of .500 got no mark. Titles got a gold star.

Flores has two gold stars but also a lot of red Xs. Flores fans have to accept that. We all do for our heroes. His resume is not unblemished and that does hurt him. He's not head an shoulders above anyone but by the same token no one else is head and shoulders above him. This is a tightly packed group. 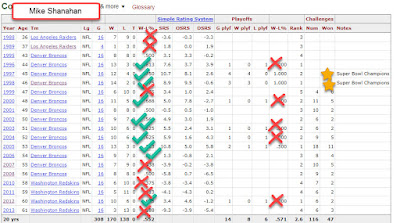 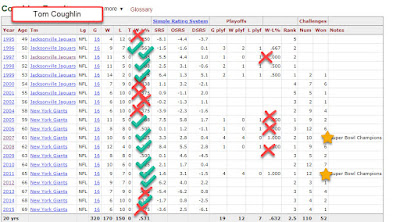 So, when people go after Cowher or Johnson, remember whoever your guys are, whether it's Coryell or Flores or Seifert, you guy's record has its blemishes, some worse than the guys you are attacking. So a better response than saying "Cowher and/or Johnson don't belong" (they do) say that you don't like the order, maybe the older guy deserved it before a younger guy, or things like that rather than "such and such sucked". Understand?

Even all-time greats like the Say Hey Kid and the Mick had their flaws.
Posted by John Turney at 9:35 AM