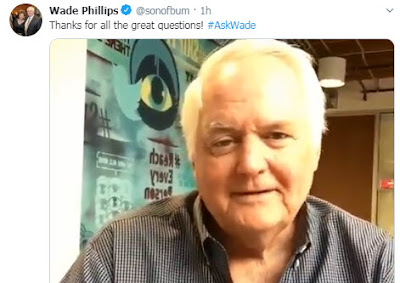 Today Coach Wade Phillips did a great chat on Twitter, fielding questions from his followers. And he did a wonderful job. He's a great coach and a gentleman.

Of course, he repeated a claim that has been made over the years, that isn't true, it's close, but it's off some.

Here is the LINK to the Q&A.

Phillips is referring to the 3-4 defense and why he likes it more than a 4-3 and then says the Houston Oilers were the first team to use the 3-4 fulltime.

The first teams to use it as their full-time base defense were the 1974 Oilers AND  ALSO the 1974 New England Patriots. Both teams opened the 1974 using the 3-4 defense, not just the Oilers.

So, Phillips is not far off, but just to be accurate the Patriots got there first as well.

Obviously, we are not saying Phillips is wrong or is intentionally deceptive, it's just likely he does not remember what the Patriots were doing.

We could show a lot more, but as we mentioned almost all teams used some form of a 3-4 defense and some point. In the 1950s teams mixed it in, even the Colts who'd move Bid Daffy Lipscomb to from right defensive tack to right inside linebacker in a 3-4 look. Others had variations as well but none didn't use it full time as the '74 Patriots and Oilers did but they did use it.