Clarity is Momentum That Has No Resistance In It— 2019 Season, and Wild Card Weekend 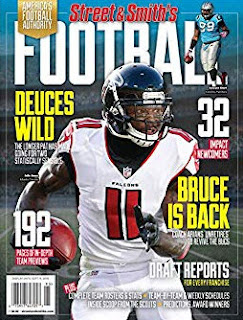 The above quote sure fits for my closing statements of the season and year. Starting point this morning is a review of an aspect rarely visited—the predictions for the year. Though many publications, will scrutinize both Street & Smith's and Sports Illustrated.

In the July/August issue of SI Connor Orr made his predictions, and he actually hit the nail on the head on six teams benefit of the doubt on the Lions/Cardinals tie). His most impressive pick was easily Dallas going 8-8, and his biggest miss having the Ravens go 5-11.

Orr was way off on a few others, and since I am writing this and did so much better in my predictions, my grade for him (I did not do letter grades as a teacher until they went on the grade sheet) is 18.8% which simply means he needs to either stop making predictions, get some help from someone who actually knows the game, or find a new job.

Next up the Street & Smith's; and a predicting disaster as they stated emphatically that the Bengals could actually compete for a wild card, and the Ravens would finish 4th in the AFC North. The long list of their failures would read like War & Peace if detailed. They did predict New Orleans, New England and Kansas City as division champions. 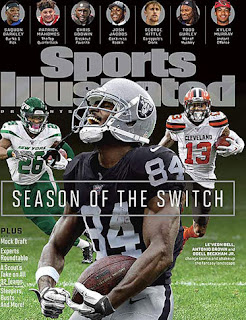 Finally former SI writer Andy Benoit in the Pro Football issue got five correct and his most impressive prediction is easily the 'Skins going 3-13. His poorest prediction was having the Chargers at 10-6. Andy no longer works at SI, but Connor does?

How many did Terence Jon Troup have right on the button; 17—and though you may challenge this, that would simply be folly. My most impressive prediction and all the folks that I correspond with will validate is that the 49ers would be the most improved team in the league—did not have them going 13-3 though, had them 9-7 with an outside chance of possibly 10 wins.

My worst prediction is a tie between the Rams & Packers as I was off by three on both. Nailed the entire AFC East on the head (thought it was easy). Did not see the Ravens and Lamar dominating, though after watching him many times here in Louisville; this young man is decisive & accurate (all of us Bill Walsh disciples see these two traits as the most important).

Today is the anniversary of the first AFL and NFL title games that would decide the first two participants in the Super Bowl. My book This Day in Football details both games on page 169 and 170.

The Packers had a strong season as they won the NFC North and defeated all of their division rivals twice. Green Bay since 2002 has a division record of 74-34—wow! WOW! The only other time they went 6-0 in this time period was 2011; and all Packer fans do not want to get beat in the divisional round (they lost to NYG). 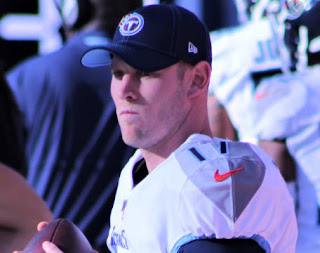 Chris Willis and John Turney did a stalwart job of picking the All-Rookie and All-Pro teams, and sure like many of their choices. With all the awards given this year, really believe Tannehill deserves some kind of an award for his performance this year? The Phoenix award as he rose from the ashes, or the "Iron sharpens Iron" award for coming off the scrap heap.

This weekend brings us the Wild Card games, and one of the best stats ever researched. Ok, what stat is that TJ? 50 years and every year since 1970 there has been at least one road winner in the play-offs! You will not hear this on the flawed NFL Network, or CBS, NBC or Fox; since those people believe research is making a fresh pot of coffee.

Was very surprised that the 49ers could go to Minnesota and defeat the Vikings in the cold, yet the road victory that still stays with me (have the game film) was Dallas defeating San Francisco in the last game ever at Kezar. 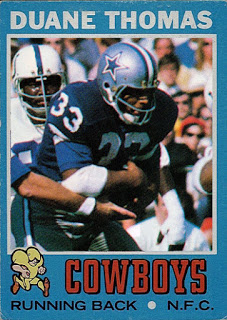 The visual of Duane Thomas running sweeps over and over again away from Dave Wilcox and attacking Jim Sniadecki will remain with me forever. Every year since at least one road winner; so who is that road winner this year? Would enjoy hearing from you folks who enjoy the Journal. Expect plenty from me in 2020 as my agent has convinced me to take on a statistical research project on the decade of the 1940's.

Plan on doing a story on the most resilient man in the history of pro football (late February for that saga), and in April detailing my favorite champion team of all-time. Hope all of you continue to read us here at the Journal, and HAPPY NEW YEAR.
Posted by TJ Troup at 5:05 AM