By John Turney
A week ago, former nose tackle Charlie Johnson passed away—August 13, 2021, he was 69. No cause of death was announced.
Though he was the three-time All-Pro (1979-81)—he also went to the Pro Bowl those three years as well few remember him.
He played college football at the University of Colorado and in 1977 the Philadelphia Eagles took him in the 7th round NFL Draft. At CU he was all Big-8 as a senior and led the Buffs in tackles as a junior and in sacks as well with 11. Prior to enrolling at CU, Johnson played a Tyler Junior College where he was a JC All-American in 1974.
Four weeks into his rookie season he earned the starting nose tackle position in the Eagles 3-4 defense and held until he was hurt in the twelfth week.
In 1978 he picked up right where he left off, stuffing the run in the middle of the Eagles defense. For his position he was credited with an inordinate amount of tackles, averaging almost 100 a year with the Eagles.
In 1980 center Ton Delone of the Browns picked Johnson as the best nose tackle he faced. Teammate John Bunting said "Nost tackle is a human target with people coming at him from all angles. Bunting added, "He's the best I've seen he's strong, fast, intelligent, enthusiastic. He's always ready to play."
Though Johnson had good quickness, he used his power to beat blocks. Said Johnson, "A lot of nose guards 'slant' to the point of attack. Me? I just come at the center straight on."  Noting that nose is a tough position but that "I'm built for it. I've got a lot of strength in my arms and a low center of gravity and these tree stump legs—I'm a little tank".
Indeed he was at 6-3, 266 pounds and his weight seemed to be distributed from the waist down.
He also kept his eye up, apparently, picking off five passes, including three in 1980 which is the most-ever in a single season by an interior defensive lineman, much less a nose tackle.
Most interceptions, defensive tackle, career—
Mike Jarmoluk—7
Charlie Johnson—5
Haloti Ngata—5
Dan Wilkinson—5
Kevin Williams—5 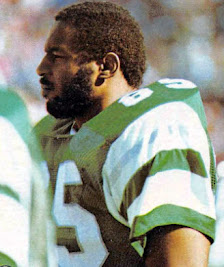 The Eagles pushed through the 1980 playoffs and to Super Bowl XV, losing to the Oakland Raiders but the strength of those teams was the defense. As a rookie, the Eagles defense was average but improving from a pretty sorry state in 1976.
In 1978 the Eagles were fifth in the NFL in rushing yards allowed and fifth in points allowed. They slipped som in 1979 but in 1980 they allowed the fewest points, the second-fewest yards, were second-best in rushing yards allowed and allowed the fewest rushing touchdowns.
In 1981 they were fourth in rushing yards allowed but number one in the NFL in points allowed and yards allowed and in all of that Johnson played a key role.
In 1982 Johnson felt Eagles Head Coach Dick Vermeil's camps were too tough and after doing it for five years he wanted to move on. He walked out of camp and asked for a trade. He said he wanted to play until he was 35 (he was already 30 even though he was just entering his sixth season, he started in the NFL when he was 25 due to serving in the military before college).
Johnson said he wanted to go to an organization where he could focus "his hitting on Sundays". He specified he wanted to go to the West Coast, "preferable Oakland" which he said was where his heart was.
The Eagles obliged and sent him to not California, but Minnesota for a 1983 second-round pick. However, as a consolation, Bud Grant was not known for not running boot camps in the Summer or during the season.
Johnson started three seasons with the Vikings, the final one in 1984, under Les Steckel a former marine and whose ideas were similar to Vermeil when it came to padded/hitting practices.
Steckel, according to Johnson, pushed religion on players, something Steckel said wasn't accurate but that Johnson was adamant about and always maintained that it was true.
When Bud Grant returned in 1985 Johnson was cut in September, the papers citing his $230,000 being part of the reason and that youngest Tim Newton was showing a lot of promise.
Regardless, 1984 was Johnson's last NFL season.
So, while it may be true that few remember Johnson but he's one who was part of the hidden game of football, among the best at his unglorified position, and was a bull-like or "tank-like" player who used tremendous leverage to plug the middle and for his time in Philly the Eagles did it very well
From 1978-81 the Eagles were second-best in the NFL in fewest yards rushing in that four-year span. They were also second in fewest rushing touchdowns allowed.
Stopping the run first was Vermeil's goal as it put teams in passing situations and in that same 1978-81 span the Eagles allowed a 58.9 defensive passer rating which was also second-best in the NFL.
Good versus the run and good versus the pass means good defense, right? Yep, the Eagles allowed the second-fewest total yards and we buried the lede—no team from 1978-81 allowed fewer points than the Eagles defense. No one.
So Johnson is at least 1/11th of that, perhaps more because he's the only three-time First-team All-Pro on that defense in that time.
Well done, Charlie.
Career stats— 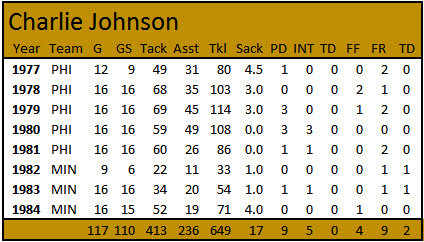