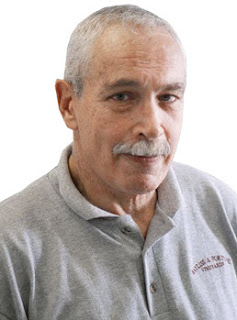 I hope everyone has a red, white, and blue July4th. As a former U.S. teacher (at Mater Dei HS); I am one of the folks who live and breathe our Nation's history and take pride in this nation. That said, today concerns my follow-up to the outstanding columns  written Paul Zimmerman (Dr. Z) that began on Monday the 27th.

Coming out of the huddle you might want to start by looking up the definition of an iconoclast. I spent some time attempting to come up with just one word to define my friend, Dr. Z, and was just damn difficult, yet that is that comes closest for me.

For those of us who know him, and have worked with him, all have stories about him, and almost always they are entertaining and funny in many different ways. Rather than relate this story about him and ME; I will try to divulge who this man is.

I have kept every letter (there are many) he ever sent to me from 1988 through 2006. Those letters are priceless for so many reasons. Almost always typed and detailed (sometimes very long), Paul would respond what had meaning in his football life.

The emphasis on his letters was and usually would be players, teams, and the aspect that counts the most: winning & losing.

I could go hours on this subject, but I will hit some highlights and hopefully give all of insight, and being entertaining at the same time. Ready?

Here goes:  September of '89, "I'm good for about 100 games a year". This statement was in regards to his meticulous evaluation of games played during the season. At this point in his life; a VCR was vital. November of '89 one of my favorite quotes from him "cut out the hokey bullshit, and dig in with some real analysis, or you'll have to get another pen pal". This quote tells you so much about the man, and did "dig in".

The in '89 we both hit the bullseye on predictions, and our All-Pro's. Some players he really was intrigued by; examples:  Warren Moon for one. Possible future All-Pro's (a favorite topic of his).  Rod Woodson.

Paul relished the opportunity to get down to the "meat & bone" in interviews with players and coaches. He related parts of his interview with Rams coach Fritz Shurmur for the upcoming '89  and he asked just brilliant questions, and fascinating answers by the Rams d-coordinator and how coached the defense that season. Though he would not actually wager money, since it was forbidden at Sports Illustrated he would "bet" vicariously through me and challenge me on my results.

We both believed that the betting line of the 49ers vs. Broncos in '89 SB too small, and predicted a win for the Niners. For this story to protect folks, yet give some idea, another quote from Dr. Z on a starting NFL defensive lineman from a 3-4 defense"One play on, one , then when they're in the four-man rush he's on the bench sucking on an orange". There are players and schemes he relished such as Merrill Hoge against the Broncos in '89. Paul referred to offensive lineman as "belly bumpers" as went away from pulling and trapping, yet the Cowboys superb scheme in the 90's, an apt nickname of "road graders". the 1990 detailed the inner workings of what went on in Philadelphia and how angry he was when he was lied to concerning his old running buddy James "Buddy" Ryan and his dismissal from the Eagles. He overcame that by predicting (I was wrong on this one) that NYG would beat Frisco in a close defensive battle to advance to the SB and play Buffalo. Uncanny. Think this is easyIn 1986 he predicated all the f teams.

Try this season one on for size. Paul would often remark about Mr. Mike Giddings and his unique ability to evaluate players, and those vignettes were insightful to say the least. January of '92 and we discussed another class of '69 football player from Orange County and a Dr. Z , Brian Kelley of the Giants, which would allow Paul to entail his rugby playing days, and some very funny stories.

September of '92 and Paul is adamant that Dallas is a to happen, and as the season does his usual dilemma of a topic of REAL importance to him. His All-Pro teams, and by this time a consistent thread of never enough offensive tackles play at an elite level, and so many inside linebackers that are terrific players. He was usually able to pick corners, yet and was honored to help, "Coach TJ, 'who is playing safety at an all-pro level and why'". This was an area I about, but an area I could and relished contributing to. I sent him charts & diagrams of basic coverages and who I thought excelled.

In the coffee table book 75 Seasons: The Complete Story of the National Football League, 1920-1995 was published, we both did in-depth charts (most of which were not used). God bless Paul he negotiated how much the league would pay me, and got me an interview at NFL Properties (another failed interview).

Paul Lionel Zimmerman was a man of strong opinions, yet he was always seeking knowledge, insight, and the inner workings of everything in the league. November of '97 and by this time I will receive from him valuable information on players of the past. So intrigued by this info, that the distinguished Steve Sabol would allow time to see film of these men (a very valuable resource). Dr. Z and his Monday Morning Column the best you could read, and by late June of 2004 I was even mentioned in writing (usually gambling or pass defense).

His saga has many layers; the game, and all his other hobbies. We could discuss the classics; from Ivanhoe to "The Last Bugle" that some of you know as Beau Geste. Could he ruffle feathers? Could he discombobulate? Lord knows he and I had phone conversations that were with condescension, sarcasm, and direct assault tactics, yet he was/is a valued friend forever.