At Pro Football Journal we are trying to pick the best individual seasons in the history of each franchise, which we will continue today with the Bills. By "Career-year" we mean the best performances at each position, with the following rule: Only one season per player per position. For example, here, we cannot pick Bruce Smith’s best two seasons and use both DE slots. 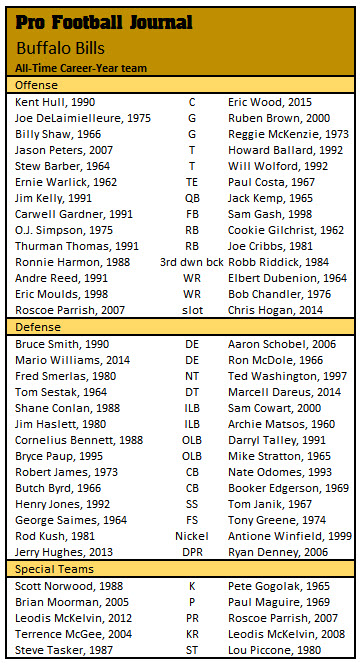 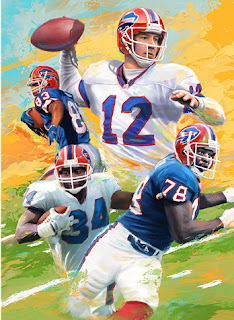 Now, running back is a very deep tradition in Buffalo. It was hard leaving guys off or relegating them to the Second-team. We went 1975 over 1973 for O.J. Simpson due to it being a more complete season, even though he was the consensus MVP in 1973. Thurman Thomas's 1991 was also an MVP season. Cookie Gilchrist (1962) and Joe Cribbs in 1981are the backups. The very solid honorable mentions are Marshawn Lynch, 2008 and  Willis McGahee, 2004 as well as Travis Henry, 2002and classic fullback Jim Braxton, 1975.

The guard-in-the-backfield fullbacks are also solid: Carwell Gardner, 1991  and Sam Gash, 1998 on the First- and Second-team, respectively and as  Jamie Mueller, 1990 and Larry Centers, 2001.

Rommie Harmon was an easy choice as the nickel running back and Robb Riddick, 1984, is the Second- there.
Jim Kelly, 1991, was his most productive season and the Second-team is Jack Kemp, 1965. We chose two honorable mentions: Doug Flutie, 1998 and Joe Ferguson, 1980. We added Drew Bledsoe for his 2002 Pro Bowl season as an honorable mention. 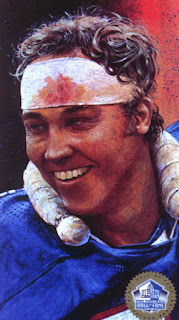 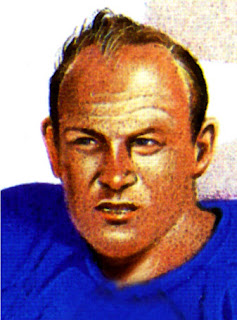 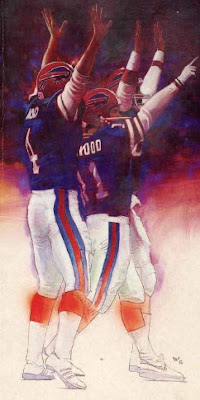 Brian Moorman, 2005 was super and  1969 was Paul Maguire's best in terms of net yardage and avoiding blocked punts.

Leodis McKelvin, 2012, beat our Roscoe Parrish, 2007 for punt returner and Terrence McGee, 2004isFirst-team kick returner with Leodis McKelvin, 2008 the Second-.
Like running back special teams specialist was very deep. nt with Steve Tasker's 1987 season with the 20 tackles, three forced fumbles, one blocked punt and three other deflections and awards for various organizations as the NFL/AFC Special teams Player of the Year. He certainly had several other years, though, that were just as good. Lou "Conehead" Piccone's 1980 was the Second-team pick. For honorable mentions we chose Marty Schottenheimer, 1965, Mark Pike, 1990 (36 tackles) and Marcus Easley, 2013.

For nickel back we went with Rod Kush, 1981, and  Antione Winfield, 1999. Kush was more of the linebacker-in-the-box type, not unlike Mark Barron Craig Dahl play these days. He had 5½ sacks in his role as the extra . Winfield was the classic third corner. Honorable mention was Jeff Nixon in 1979, where he was more like a Randy Hughes, playing safety while others moved to the nickel. Nixon did start some due to injuries, but he picked 6 passes in his role. Jerry Hughes, 2013 is the designated pass rusher and Ryan Denney, 2006, us Second-team

Booker Edgerson was interesting in that he had pick 6s in 1968 but didn't get any honors, but in 1969 he only had one pick but was Second-team All-AFL. Was it a case of getting rewarded for previous season or was he someone who quarterbacks didn't want to challenge? We choose the latter. Mario Clark was a Second-team All-AFC in 1981 and Clements was a Pro Bowler in 2004. Smith and Winfield were good players and didn't get honors, but still got the HMs here. 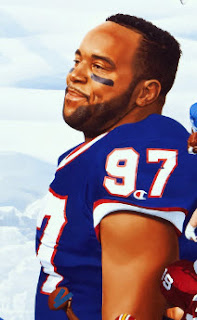 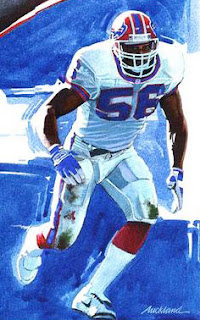 Fred Smerlas, 1980 is the top nose tackle followed by Ted Washington, 1997, Washington was really a 4-3 1/shade technique.  Kyle Williams, 2010 and Jeff Wright, 1992, are the honorable mentions. Wright was a quick, slashing player rather that the stout like Smerlas. 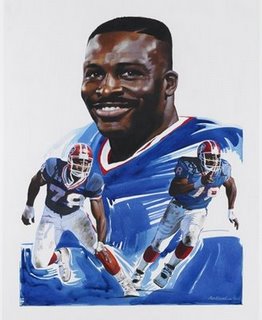 Agree or disagree with any of the selections? Post in comment section below.
Posted by John Turney at 7:19 PM