We at Pro Football Journal are trying to pick the best individual seasons in the history of each franchise, which we will continue today with the New York Jets. By "Career-year" we mean the best performances at each position, with the following rule: Only one season per player per position. For example, here, we cannot pick Joe Namath’s  two seasons and use both QB slots. 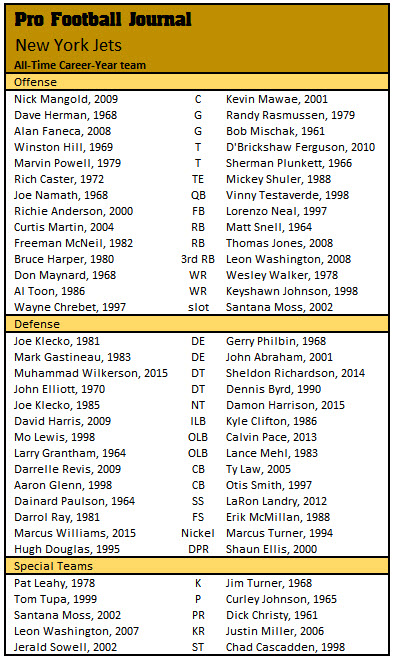 Sowell was a Pro Bowler and Cascadden was an alternate so we went with them. Honorable mentions go to Chris Burkett was voted as the team MVP in 1991 (H/T to JWL of PFWA on that one) largely for his special teams play. He was second on the team tackles (13 and blocked a punt). Also for Ken Rose, who in 1988 was an had 5 sacks as the nickel linebacker who specialized in blitzes.

With the kickers, we  more by honors than statistics due to the changing nature of the kicking game. There is no  or Leahy's kicking percentages would be acceptable today, but at the time they were All-Pro and All-AFL performers. Ditto for the punters. But we give an HM to Steve Weatherford's 2010 season when he had a fine 38.1 net average and 42 punts inside the 20 with only 4 touchbacks. 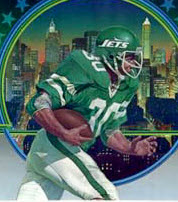 For the returners, to us the most impressive thing is the touchdowns and honors, then the return averages and in the Jets team history we think Moss and Washington get the top slots. In 2007 Washington returned three kicks to the house and in 2002 returned  25 punts for 413 yards and a 16.5 average, taking two of them back for scores.

Speaking of slots we are going with Chrebet's 1997 season as the slot receiver, followed by Moss in 2002. The other offensive specialists are Bruce Harper and Leon Washington. Harper defined the 3rd down back, someone who could come in and catch a pass on 3rd and short and also run a draw or block enough to help the 3rd down offensive package. He was also a fine returner of both kicks and punts so he gets an honorable mention there, too, behind Moss, Washington, Christy and Miller. 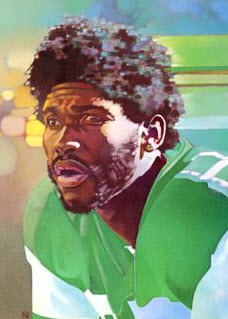 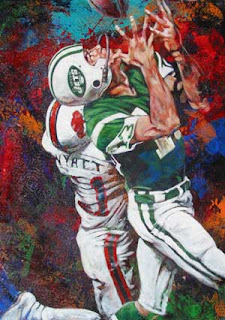 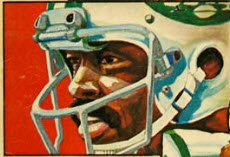 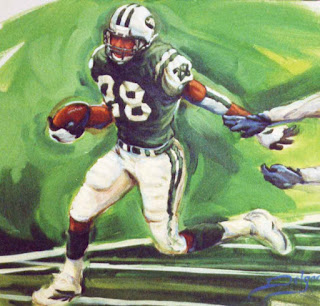 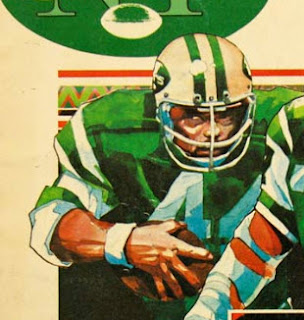 The running backs were very difficult, not picking the good seasons but ordering them. We are going with Curtis Martin, 2004, and Freeman McNeil, 1982, for the First-team and Matt Snell, 1964, and Thomas Jones, 2008, for the Second-teams. Our honorable mentions are LaDainian Tomlinson, 2011,  John Riggins, 1975, and Bill Mathis, 1961.

For the fullbacks, we liked Richie Anderson, 2000, over Lorenzo Neal's (there is that name again), 1997 season. Johnny Hector, 1988, is an honorable mention. 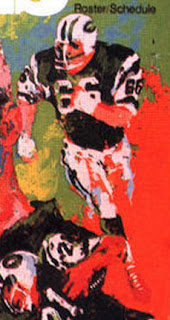 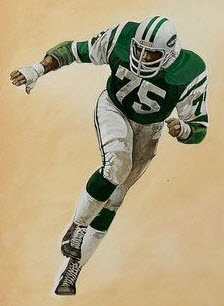 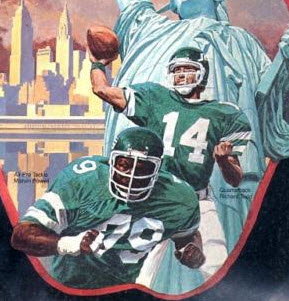 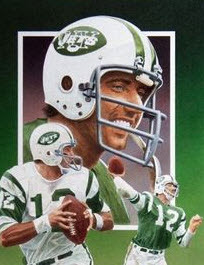 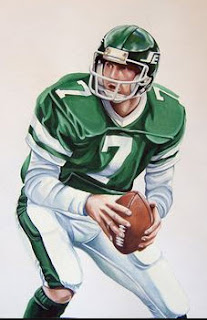 For Namath, we chose his 1968 season where he garners some MVP/Player of the Year Awards and won the Super Bowl, though his stats were not near his 4,000-yard season of 1967. Oddly, after Namath beat the Colts in Super Bowl III he didn't beat a winning team until late in 1974 when the Jets beat the Dolphins. Backing up Namath is Vinny Testaverde, 1998. We chose just two honorable mentions:  Ken O'Brien, 1985 and Richard Todd, 1981. 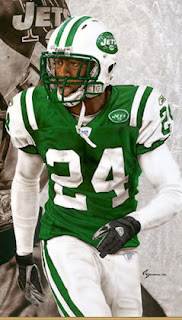 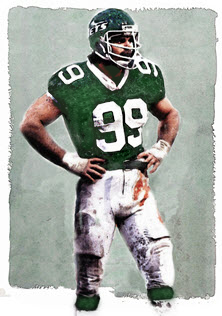 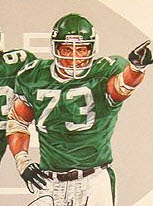 Defensive line decisions were very, very difficult. Joe Klecko, 1981, was the only easy choice. was All-Pro, the AFC Defensive Player of the Year, made 72 tackles and led the NFL with 20½ sacks) We went with Mark Gastineau in 1983 over 1981-82, and 84 because he played the run better (11.5 stuffs among his 80 tackles, both a career-highs) and still had 19 sacks ( highest of his career). Said Paul Zimmerman about Gastineau that season, "The Jets' Mark Gastineau, the AFC's leading sacker, with 19, was a target for TV commentators this year. They were always telling you how he was overplaying the pass, at the expense of the run, but then their isolated camera would catch him stopping the for a yard loss. Maybe Gastineau's techniques aren't perfect yet, but nobody hustled as much as he did—for a full afternoon. No, I don't go for the sack dance either, but give the guy credit. He played great this year".

Agree? Disagree? Let us know in below.