A while back we wrote about the logo change contemplated by the New England Patriots that was nixed by a fan vote. In 1971 the name change was also reversed due to disdain by the Patriots media and fan base.

In 1971 the Boston Patriots were moving to Foxboro, Massachusetts, after playing eleven seasons in various Boston venues. The move prompted the team's board of directors that a name change was in order and on or about February 18, 1971, they voted to change the name to the Bay State Patriots. The club even issued a press release announcing the name change to the local and national media. 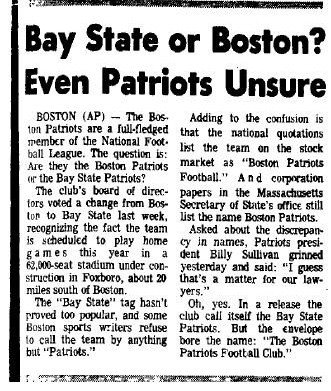 resistance caused the reversal of the new name and the board voted to officially change the name to the New England Patriots and that name was approved by the rest of the NFL owners. So, the Bay State Patriots were short-lived, about 35 days. Whew, Another close call.