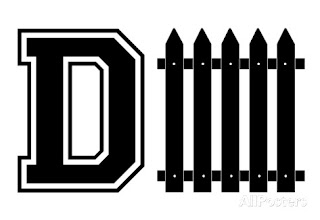 If you were to ask the top running backs of the 1950s what defense, they dreaded to face year-in and year-out they would likely say the New York Football Giants or maybe the Cleveland Browns. In the 1960s a may say the Dallas Doomsday Defense of Bob Lilly and Lee Roy Jordon or the Fearsome Foursome of the Rams that featured Merlin Olsen and Deacon Jones. Or the Purple People Eaters of Minnesota that had Carl Eller and Alan Page on the line.

The next decade may yield answers like the Pittsburgh's Steel Curtain with Joe Greene and Jack Lambert or the next iteration of the Dallas Defense with Too Tall Jones, Randy White and Harvey Martin or the next version of the L.A. Rams defense that still had Merlin Olsen and added Jack Youngblood and Hacksaw Reynolds or even the Orange Crush Defense that featured Randy Gradishar.

The 1980s back would likely mention the 1985 Bears or the Giants defense that featured Lawrence Taylor and Harry Carson. In the 1990s and 2000s there were Ray Lewis's Ravens and Dick LeBeau's Steeler defenses. All are top run defending teams and all were great and none would be a bad choice.

We looked at teams over a six-year period (also 5-, 7- and 8-year) to see who allowed the lowest yards per rush over a span or era, if you will. We settled on six since that was the amount of time Bud Carson was the defensive coordinator for the Steel Curtain (1972-77). We could easily have gone with five or seven and may do later posts on those.

We chose 1952 since that is the year takedowns of quarterbacks were not included in rushing yards, so that was a logical starting point.

So, who is #1 in lowest yards per rush over a 6-year span? Would you guess the San Diego Chargers of the late-1990s and early 2000s? Most casual fans could only name Junior Seau as a member of that team. Solid fans may remember Rodney Harrison was on that team as well. 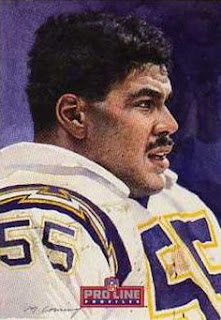 The bulk of the work was done under defensive coordinator Joe Pascale's 5-year stint (1997-01). The foundation was set with Bill Arnsbarger in 1992 who revamped the 3-4 defense into a 4-3 and after a short time brought in run-stuffing tackles, Shawn Lee and Reuben Davis who were the "Two Tons of Fun" .

Eventually, they gave way to John Parella and John Hand and edge rushers like Leslie O'neal, Chris Mims, Burt Grossman and Raylee Johnson were replaced with -oriented ends like Marco Coleman William Fuller and then later  Albert Fontenot and Marcelles Wiley. Only Fuller and Wiley had reputations as it in San Diego. But they sure stopped the opponent's running game. 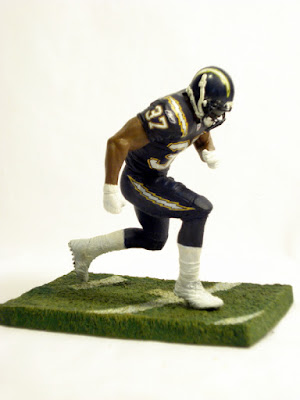 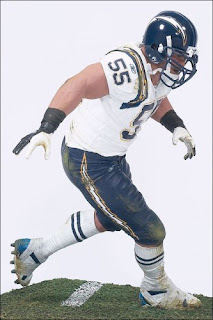 The focus on stopping the run did hurt the pass rush as the Chargers were not effective at getting to the quarterback like some the others on the following list. these key years they averaged about 38 sacks per 16 games, whereas the Cowboys and Rams had over 50 sacks per 16 games. The Ravens around 41 and the Patriots averaged around 47 per 16 games. Nonetheless, it was a remarkable performance that few experts in football would have guessed. They are truly one of the more underrated defenses ever.

Note on Only teams that are exactly tied are counted as ties. We figured it to more than three decimal points, but are only showing three. 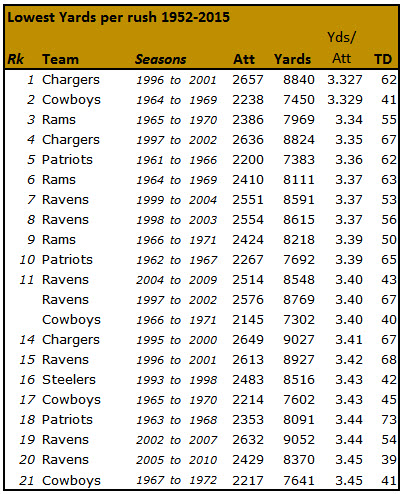 Clearly we see the Chargers are on top , what really amounts to a rounding error. We are not contending that those on top of are necessarily the best run-stopping teams we think that whoever it was is on this list somewhere. can differ, conditions, how many attempts a team faces and other factors figure in, however, in a -driven world we analyze the stats as they are then apply opinions on top of that.

Following the Chargers are two usual suspects, the Doomsday Defense and the Fearsome Foursome. The 1960s Patriots make a really strong showing as well, with Nick Buoniconti, Earthquake Hunt and Houston Antwine the top dogs on that defense. The Ravens were so good for so long they take up lots of slots, as do the Rams and Cowboys. 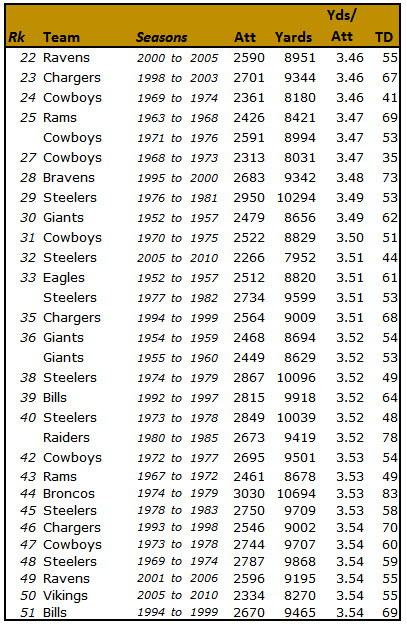 At #29 the Steel Curtain makes its first appearance and the 1950s Giants defense does, too. The Orange Crush is at #44 and at #50 is the Williams Wall (Kevin and Pat Williams) Defense of the Vikings. Bruce Smith's Bills also appear. 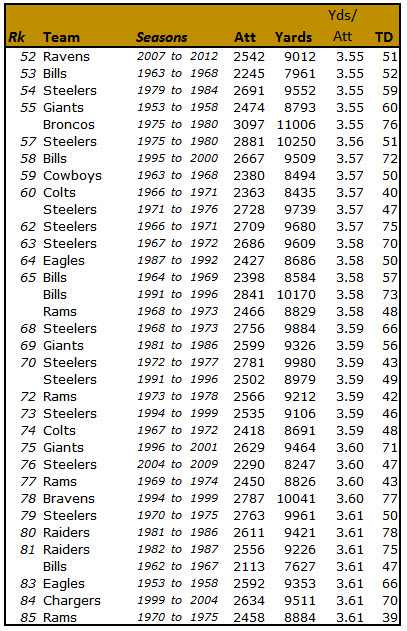 At #53 is the Tom Sestak, Ron McDole, Mike Stratton defense of the 1960s Bills. The Bubba Smith and Mike Curtis Colts defense at #60. At #72 is the Olsen, Youngblood, Reynolds, Fred Dryer and Isiah Robertson of the Rams. The 1990s Blitzburgh defense is here as well. The Reggie White, Jerome Brown defense of the Eagles as well as the Chuck Bednarik Norm "Wildman" Willey defense of the 1950s Eagles. 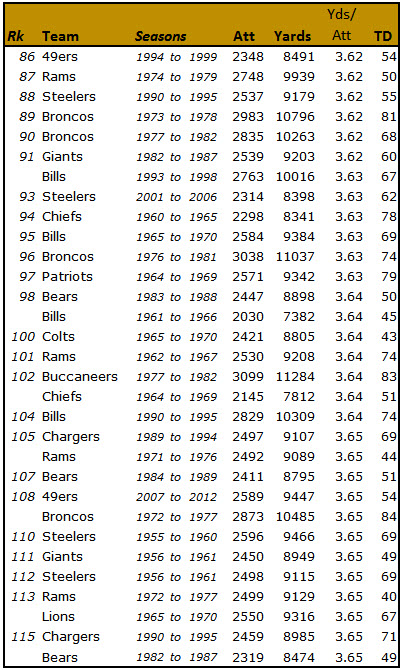 We went to 115 to make sure the 1980s Bears were represented. They were excellent versus the also went after the passer as well as anyone in of the game and it did cause the run defense to drop, but remember we are looking at fractions of yards here, from 3.33 to 3.65. That is how tight this window is. We cut off anything above 3.65, though many great defenses were in that range as well.  At #86 are the 1990s 49ers with Bryant Young and Dana Stubblefield. At #108 are the Patrick Willis 49ers.

Football is . While we love to count things and love the statistics, we love the art more. However, digging into this is quite interesting.

Chargers. Who'd have guessed they were THAT