SPIRALING TO THE BOTTOM: The 1965 Pittsburgh Steelers

LOOKING BACK
By TJ Troup
When a new coach comes aboard a new team there is almost always optimism. When Mike Nixon was named head coach of the Steelers in the summer of '65 he was told by Art Rooney to do the best he could.

Dan Rooney realized that though Buddy Parker had some strong moments as head coach; the philosophy of how to build a team had become not only an issue, but a bone of contention between the two. Rooney accepted Parker's resignation (he never coached again), thus a man with previous failed head coaching experience "inherited" the Black & Gold.

Before going any further, let's take a quick look at Parker's record. When the Steelers opened the 1961 season with 4 straight losses his head coaching record with Pittsburgh stood at 24-25-3; not exactly earth shattering.

What kind of team did Nixon have you ask? Sixteen men on the roster had either earned a Pro Bowl berth or would later on in their playing career. Today is Gary Ballman's 76th birthday, and he was the only Steeler to go to Los Angeles for the post season classic. 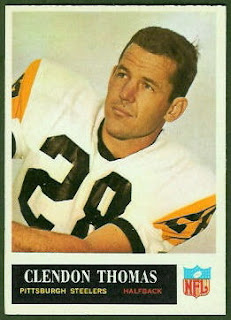 The Pittsburgh offense would align in the antiquated double tight end full house t-formation many times during the season. The main issue with this alignment were that the tight ends were converted safety Clendon Thomas & Roy Jefferson. Neither had the size or blocking ability to make this formation work. Thomas and Jefferson both had their moments that year, yet neither would be viewed as top flight NFL receiver.

Paul Martha was selected right before Paul Warfield in the '64 draft, and never caught a pass in a Steeler victory. A fine athlete, he would later make his mark at free safety. The passer rating system is a tool to evaluate a team's efficiency in throwing the ball. In the two Pittsburgh victories the passer rating was a commendable 79.8, but in the 12 losses a woeful 36.0! The two men who were under center the most were Bill Nelsen and Tommy Wade. Nelsen demonstrated ability, but inconsistency and injury plagued him in his time in Pittsburgh. Tommy Wade would be viewed as a "snap taker"..not an NFL quarterback. Poor performance followed poor performance during the campaign.

Since they could not throw with efficiency, maybe they should have run the ball? Hard running, but pedestrian Mike Lind just did not measure up at fullback, and though Dick Hoak gave maximum effort, he did not add much to the ground attack. Hoak was an excellent receiver out of the backfield. Clarence Peaks when healthy and on the field was the only bright spot in running the ball.  Later in the year; Cannonball Butler got an opportunity to show what he could do at halfback.

The veteran and rock solid offensive line of left tackle Dan James, left guard Mike Sandusky, center Art Hunter, right guard Ray Lemek, and right tackle Charlie Bradshaw were adequate in the run game under Ernie Hefferle (his only year), but a disaster as pass protectors. At one point in the year they allowed 32 sacks in a five game stretch. Mike Magac, Bob Nichols, and Ray Mansfield also earned their letters with significant playing time.

The Steeler offense was dead last in scoring. Historically, the Steeler defense is always viewed as hard hitting; and while that is a commendable trait....the key of course is to either get the ball back, and limit scoring. 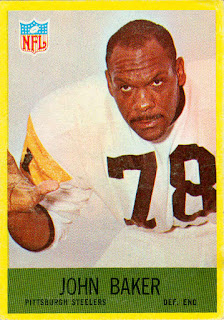 Pittsburgh allowed 397 points...OUCH! So who lined up on defense? Big John Baker started at left end, and had some bright moments (he was a captain), but with so many strong side defensive ends in the league playing superb football he would be considered "just a guy". Hard charging Riley Gunnels (wore both #61 and #74) was an effective pass rusher, and fine in pursuit, while

Ken Kortas and Chuck Hinton both were learning on the job at the defensive tackle position. Ben McGee started at right defensive end, and with experience will be an excellent defensive lineman. Excellent at shedding blocks, and in pursuit....he will no doubt be a fine player for a long time. 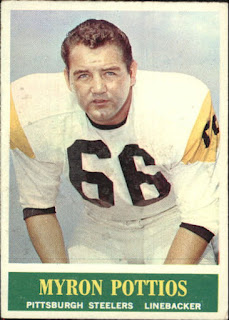 Myron Pottios when healthy at middle linebacker would be viewed among the upper echelon of linebackers in the league. Had the size, instincts, and quickness to make plays against both the pass and run; but he was injured much of the year. Rod Breedlove would move from right linebacker to the middle, and Max Messner would start at right linebacker. Though the effort was commendable, neither man was much of a pass defender. Many times they did not reach the passer. As run defenders, they were average at best. John Campbell started at left linebacker, and demonstrated enough to stay around for at least another year.

The revolving door in the secondary hurt the cohesiveness on pass defense. Bob Hohn attempted to play left corner, but the usual starter was Willie Daniel. Marv Woodson hustled, but was out of position much of the time at left safety. He should be playing corner. Daniel would also see plenty of playing time at left safety. Jim Bradshaw lacked speed, yet had a fine year at right safety. His performance against Philadelphia was the difference in one of the two Pittsburgh victories. A punishing tackler, and a savvy pass defender....when Bradshaw was not on the field the defense definitely dropped a few notches.

Bob Sherman attempted to pick up the slack at right safety, but lacked the skills necessary to remain in the league. Brady Keys tough, quick, with blazing speed. He continued to improve at and was one of the few men who would grade out as a strong defender. Tom Keane was a fine player as a defensive back during his playing days, and was an excellent coach for Shula later on in Miami, but his year in Pittsburgh was a forgettable one. ponent had a 94.5 passer rating when beating the Steelers (43.1 in the two wins).

Frank Lambert boomed the ball as a punter, yet the Steelers punt coverage was terrible (twice return men had over 100 yards against them). Mike Clark struggled as the kicker.

The surprising victory over Philadelphia brought the struggling Cowboys to Pitt Stadium. This is the highlight of the season as Nelsen twice hit Ballman on post patterns for touchdowns. The first flanked right and beating Cornell Green, and the second flanked left and torching Warren Livingston on the well thrown passes by Nelsen. The Steelers would drop the final seven games of the year. The aftermath of the dismal season brings in Bill Austin as head coach and he keeps Lavern "Torgy" Torgeson on staff to help him as a defensive coach. The Austin years are a continuing struggle in player personnel and performance on the field. You just don't win in the NFL without talent
Posted by TJ Troup at 11:32 AM