Yet Another Near-Miss for the Patriots Helmets

As we explored a few months ago the Patriots almost went with a new helmet concept that was rejected by the fans.

Now, we've run across another one that occurred in 1971 the New England, err,  Bay State Patriots.

According to Bob Moore, the former head of PR for the Chiefs and current team historian, who wrote in Chiefs.com, "In 1971 This prototype was never adopted as the team considered a move to a look conducive to the 1970s." 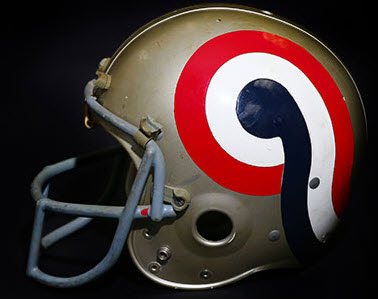 Well, wouldn't that have beaten all? The Bay State Patriots THAT helmet.

Whew. Another close call.
Posted by John Turney at 3:31 PM