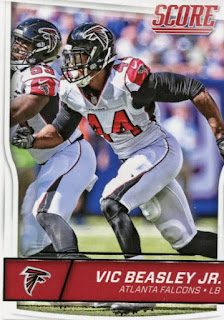 Falcons outside linebacker Vic Beasley Jr. turned in a fine season and will likely be a First-team All-Pro as an "edge" player on the AP All-Pro team. He certainly is that, however, he's still listed by the Falcons as an OLB and wears the number "44" which the NFL recently allowed for linebackers. Nonetheless, he cannot get any votes at that position since we think it was not permitted by the AP under their new system.

Regardless, it was a fine season, totaling 15.5 sacks and six forced fumbles and a fumble recovery for a touchdown. Here are his game-by-game defensive stats: 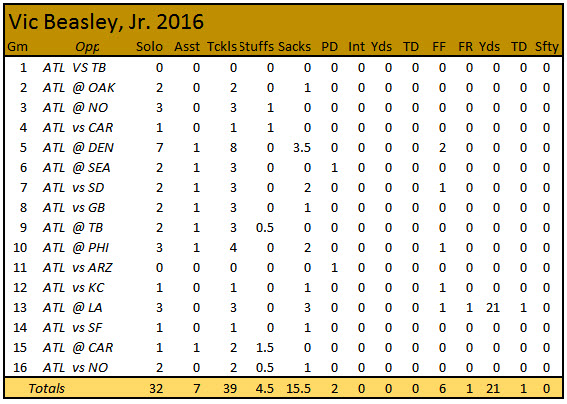 It rates as one of the best performances by an OLBer in team history, but may not be the top season. For that, Joel Williams's 1980 season has to be considered. Largely forgotten, he totaled 16 sacks in 1980, two years before they became and official stats. He, like Beasley, had a scoop and score, but also picked off two passes and defensed 12 more passes.

Here are his game-by-game defensive stats: 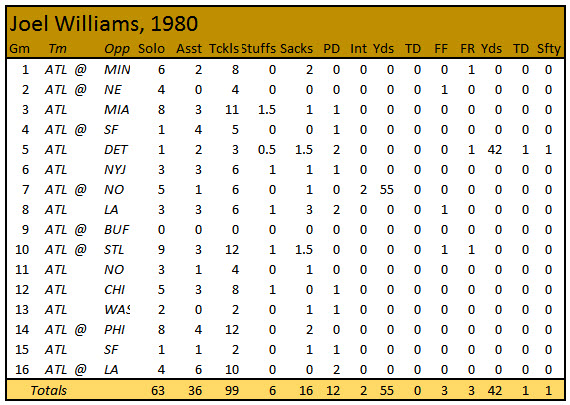 Williams 1980 was overlooked at the time, so much so that the only Topps Football Card he appeared on was the Falcons Team Leader Card, which he shared with three others: 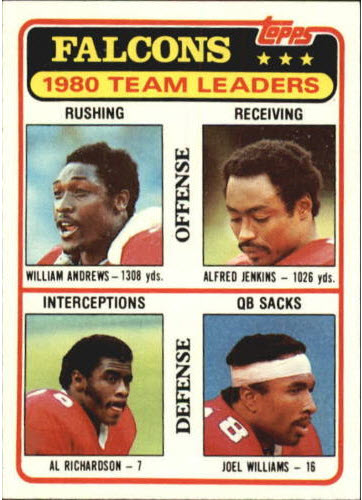 He was an honorable mention by Sporting News and UPI, but that's the highest post-season honors he got on an excellent 12-4 division-winning Falcons team. Williams never reached his 1980 standard for production for the rest of his career, which was plagued by knee injuries, but in that season, he was a forerunner, albeit an undersized one, to the rushbackers of the 1980s. At under 220 pounds and playing left outside linebacker in the Falcons 3-4 defense he was the guy who got after the passer and ROLB Al Richardson got the job of dropping into coverage more than rush (though he did both, as did Williams) and he responded with 7 interceptions, a very high number of a 3-4 OLBer. And Richardson was likely smaller than Williams. Reports in that era stated that Williams was around 216 and Richardson was 208, though they were listed at 220 and 211, respectively.

So, as Beasley gets his deserved honors, it seems appropriate to also remember Joel Williams, the NFL's first real rushbacker who had big-time sack numbers in a season.