Most Points Scored by Offense in Single Season

The 2016 Falcons finish the year tied for the 8th most points scored in a season in NFL history. However when we adjust for points scored by defenses and special teams they are still eighth but some of the teams around them change.

Sometimes it's forgotten that the 1999 and 2001 St. Louis Rams had excellent defenses and special teams and scored often with those units. In 1999 the Rams defense and special teams units directly scored 66 points (excluding FGs and PATs). We also excluded any safeties.

Below is a list with those types of touchdowns excluded. Of course, in football all stats are skewed in some way. Here, for example, if an opponent is intercepted and the return goes to the 1 and the offense scores from there, it's tantamount to a pick six, but there would need to be a lot of research work to exclude such drives.

Of note is the 1961 Houston Oilers who are still on this list despite playing a 14-game schedule. 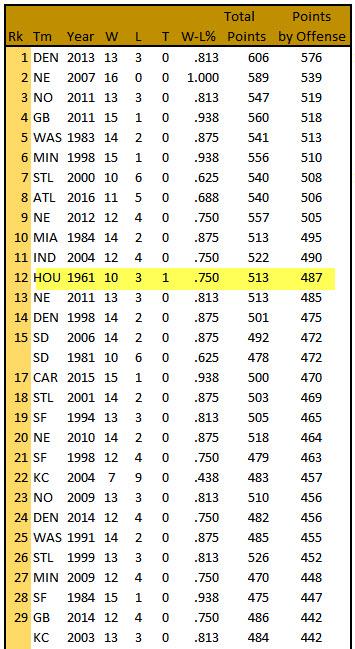