UPDATE
By John Turney
Earlier today I made a prediction that Von Miller will likely get votes at both "edge" and outside linebacker in the AP All-Pro team voting. I have to admit I will be wrong. The reason is this: the AP made sure that there will not be cross-voting for Miller or others because the positions of certain players were designated in advance by the AP. And since Miller was designated as an OLBer he won't be getting any votes at "edge".

It is my understanding that the AP voting panel received this instruction via email:
_____________________________
"AP Voters:
Below is a list of specific defensive players and their defined positions for our new All-Pro ballot.

So, apparently Von Miller is in a different category than some other OLBers like, for example Vic Bealsey, Jr. who is listed as an outside linebacker by the Atlanta Falcons and NFL.com:

The same is true for Terrell Suggs: 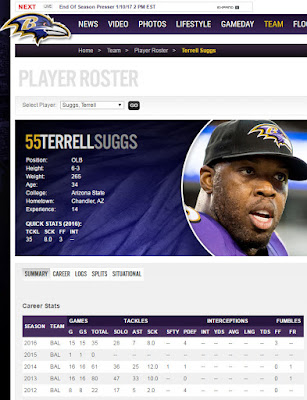 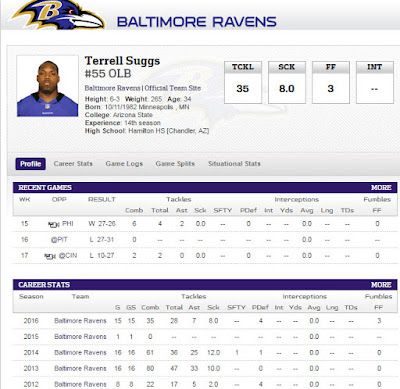 We could go on because the same is true for many on the APs "edge" list. What that does is make lots of OLBers, so designated by their teams, in the same group as defensive ends and the lists seems weighted to the "edge" player designations as opposed to the OLBers where only three of the "rush" types are listed.

Miller, under this format will probably be unanimous, or very near to it, at one of the three linebacker spots. Therefore, my prediction will be wrong about the new designation because I trusted that the AP would allow the voters to choose where they saw a player fitting into the voting, i.e. if he was a edge or OLBer.

Perhaps the AP didn't want one player in two positions as happened last year, and they have ensured it doesn't, but it does ensure lighter competition at OLBer but putting Miller, Alexander, even Clay Matthews there and not in a pile of "edge" players some of whom are far more similar to Miller and Alexander and Matthews than the defensive ends listed, who almost never drop into coverage.

Having seen tons of plays by both Mack and Miller, I feel confident that they are playing the same spot. When they are in a 3-4 or 30 defense, they are linebackers, with Mack moving sides more often and when they are in a 4-3 (40 nickel or 40 dime usually) they are defensive ends, again with Miller usually on the left and Mack both sides. My thoughts would be the same for Beasley, Suggs, Kerrigan, Perry,  Orakpo and others. 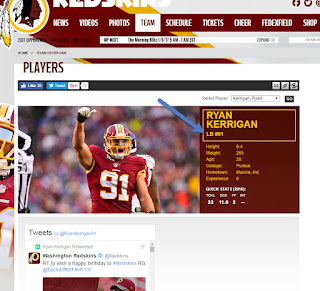 So, to be clear, all of these players are edge rushers, as the term in commonly used, but many are listed as linebackers, I am not clear as to how the distinctions were made for Miller, Alexander and Matthews versus the other OLBers who rush the passer. Perhaps the AP will enlighten us tomorrow.

Maybe there are differences I am not seeing, but from what I saw, Miller dropped into coverage some, not a lot, but not an insignificant amount, either and so did Mack , Ford, Houston, Beasley and Suggs and the rest of his "peers".

Would love to hear comments on this one.
Posted by John Turney at 11:15 PM