In the 1970s the publication Football News chose a "Man of the Year" to represent the football person who was most effective that season. It was more akin to an Executive/Owner of the Year-type award since it was based on effectiveness in football decisions that led to on-the-field success, but there were exceptions, with the first one going to ABC's Roone Arledge and the 1977 award went to Pete Rozelle.

Here is the cover of the issue that named Art Rooney the 1978 Man of the Year. 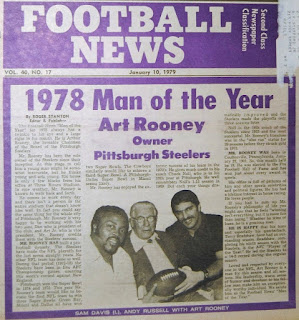