Hall of Fame Predictions: The Kicker 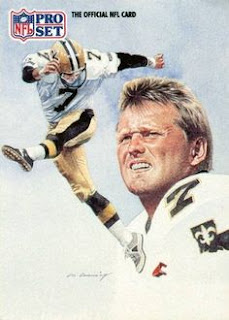 He was, also, the one of the first couple of kickers to be reliable from 50-yards and out and not just from 50- or 51-yards, but from 54- and 55 yards. He was a definate advantage for the Saints and Falcons, before the rest of the NFL's kickers caught up. Also, with his big leg, he was an aide to the kickoff coverage teams, being able to outpace most other kickers in touchbacks.

The Knock: Really only that he had a bit of an advantage kicking indoors in 22 of his 25 seasons. Also, there are so many good and worthy players, for good or bad, kickers get overlooked.

The Prediction:  We think Andersen will make the Top 10 this year and has a chance for induction, but will have to wait. We don't see him making the Top 5 and then getting the 80% yes votes needed.

As with most, if not all, of the Final 15, he's worthy of induction, he was a cut (or two) above even the good kickers of his day.
Posted by John Turney at 5:19 PM