The Continuing Saga: Road Victories In the Playoffs


Years ago, in Steve Sabol's office, I was asked who was the best second place team of all-time? Agreed with Steve that the 1962 Lions (Shula was d-coordinator), and 1967 Colts (head coach) were at the top of the list. Then, Don Shula becomes head coach of the moribund Dolphins in 1970 and leads them to their first playoff berth in the first year of the wild card.

I have been told that behind the scenes Shula had Rozelle's ear concerning a "wild card" team making the playoffs. How appropriate that his team got the first one.

Background given.....this story concerns a continuing saga....there has been AT LEAST ONE ROAD VICTORY EVERY YEAR since the inception of the Wild Card in 1970. So, who are the road warriors this year?

Last year was unique in that all four road teams won in the Wild card round, and then all six home teams won the rest of the games. 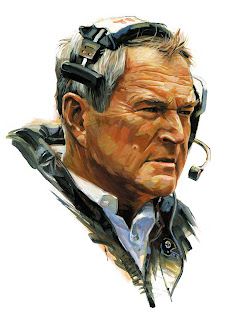 In closing, in honor of both Don Shula (birthday is tomorrow), and Chuck Noll, his birthday is Wednesday who he also took his Steelers to the playoffs numerous times ....look forward in the comments section as to who wins on the road this year?
Posted by TJ Troup at 4:07 AM