Where Should the Pete Carroll-era Seahawks Defense Rank Among All-Time Best?

PERSPECTIVE
By John Turney
"Sustained greatness" is a term Coach T.J. Troup likes to use when trying to rate players or defenses or teams. Though the Seahawks didn't lead the NFL in scoring defense this season (first time they didn't in five years) they still allowed the fewest over that five-year period.

Additionally, in the last six or seven seasons, they have led the NFL in several categories for 5-year intervals, a sure mark of sustained greatness.

The following chart shows the NFL leaders for five-year periods since 1963, when the sack became an official team statistic.  Represented is Doomsday Defense, the Fearsome Foursome, Orange Crush, the No Name Defense, the 46 defense and others with and without catchy nicknames.

This chart is wide, but it can be clicked on for better viewing: 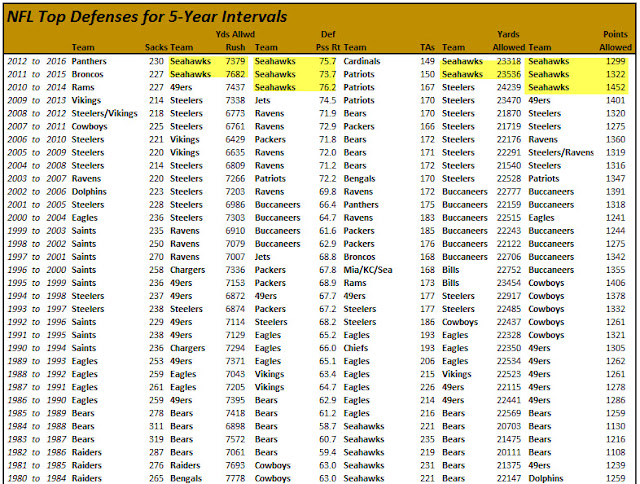 Though not comprehensive, the categories we chose were sacks, yards allowed rushing, defensive passer rating, takaways, total yards allowed and points allowed.
Posted by John Turney at 11:49 AM