Hall of Fame Predictions: The Quarterback 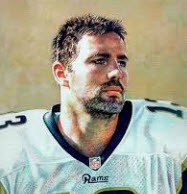 The Hype:  Kurt Warner is a 2-time MVP (actually a 3-time MVP as he won the final NEA MVP in 2008 to go with his 1999 AP and PFWA and 2001 AP awards) and a Super Bowl MVP. He set plenty of records in his time in the NFL and led his team to three Super Bowls. In those games he played well and had his team in position to win, but lost two in the final seconds.  He is a two-time passing champion and led the NFL in TD passes twice and his 7.9 yards per attempt is 6th all time. He was also the 2008 Walter Payton NFL Man of the Year.

The Knock:  The knock is the so-called "donut hole" in his career, the few years he spent injured and in the doldrums in-between his Super Bowl appearances.

The Prediction:  The donut hole caused Warner to not really be worthy of first-ballot consideration but now, a couple years later and with Brett Favre out of the way, we predict Warner will be elected and then inducted in the Summer of 2017.
Posted by John Turney at 12:41 PM