Bob McGinn MMQB All-Time Draft Team is next up for review and he, like my team, is a 3-4 defense.

His safeties fit well as so do his outside backers. His inside backers have played some (Seau anyway) in a 3-4 defense but both would project well. Pat Williams was a 4-3 nose tackle, so the move to 3-4 nose would not be a problem. Reggie White played some in a 3-4, though he thrived more in a 4-3, but he and Selmon would do well with this set of players.

McGinn has two finesse-type left tackles, but moving one to right tackle would be possible with these two. Outside Anthony Munoz I think Walter Jones is the best left tackle. So, I'd project that Pace would have to move sides. 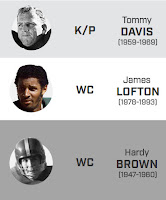 Tommy Davis will handle both kicking and punting. His punting is great, but in my view his kicking was average.
Posted by John Turney at 5:00 PM