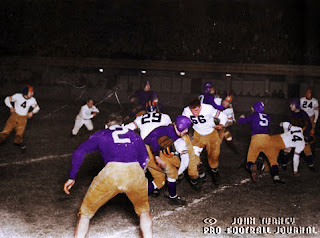 In the NFL's first playoff game in 1932 Bronko Nagurski threw a touchdown pass to Red Grange.

According to Wikipedia "In the fourth quarter, the Bears scored on a controversial touchdown: Carl Brumbaugh handed the ball off to Nagurski, who pulled up and threw to Red Grange in the end zone for the score. Rules at the time mandated that a forward pass had to be thrown from at least five yards behind the line of scrimmage. The Spartans argued Nagurski did not drop back five yards before passing to Grange, but the touchdown stood. "
There were a lot of oddities in that game, one was the contest was played indoors on a short field. But those are stories for another day. 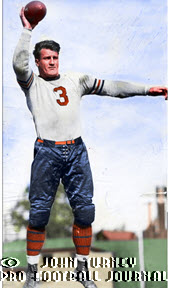 TOnight the Titans running back Derrick Henry threw a jump pass against the heavily favored Ravens.

It was nice to see. Though it's doubtful this was the first jump pass for a touchdown in a playoff game since 1932, it's possible. But they were common then and in the 1930s is equally possible someone did it. Regardless. Talk about fun. Well done Titans, well done.
Posted by John Turney at 7:36 PM