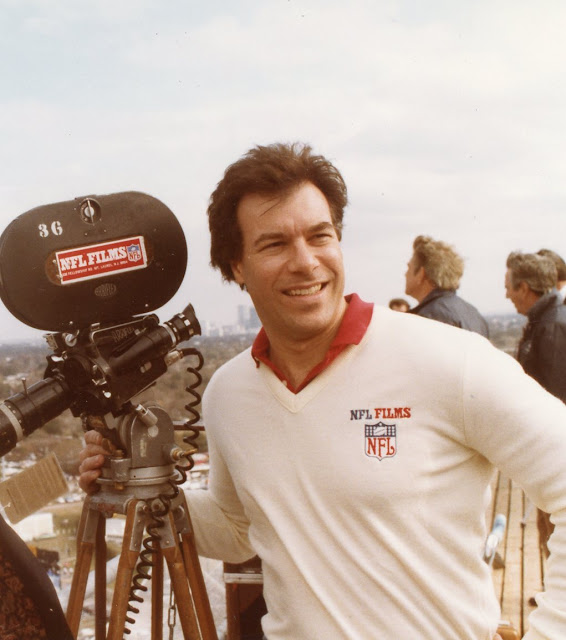 Last week the Pro Football Hall of Fame announced its Centennial Class for 2020 and with the selection of Steve Sabol as one of the three contributors, it got me thinking of my former boss, mentor and friend.

As I think about the man, Steve Sabol, I think about one of the most unique qualities that he possessed. It didn’t matter if you were a rookie producer, a 10-year vet or a 30-year employee that he knew for three decades. He had a REALTIONSHIP with you. It didn’t matter that he was the President of NFL Films. He got to know you regardless of who you were or what you did. That is what made him special. It is a trait he learned from his father, Ed Sabol.

I will always remember him taking the time to talk to anybody. He was one of the rare executives that was in the office everyday- he rarely took a vacation- and he always had his door open to listen to anything you wanted to say. Of course, Steve’s two favorite topics were football and making movies.

Mainly because of the support of a few producers and Steve Sabol, I was hired full-time in 1996 to run the Research Library. He saw something in me that I didn’t see in myself. Somebody that could work hard and do a job that I was passionate about. He gave me my big break at the age of 25.

Before he passed away in 2012, I was fortunate to work for him at NFL Films for 17 years. I had many conversations with him that I treasure. He always took the time to see how I was doing and if I needed anything to make my job better. I really enjoyed the times when he would just leave me a yellow Post-It note to help me include something for the Library. In my entire time at Films he never failed in giving me what I needed to be successful at my job. When I wanted to write a book on early pro football he gave me his support and let me know, whatever I needed (material, time off to write, etc.), I could have it. This is what made him special.
I found out early on that he was not your typical boss. There are two short stories I want to share that illustrates how he cared about you and how he had a RELATIONSHIP with you.

1st) After a year working for NFL Films as a full-time employee Steve got a call from the Pro Football Hall of Fame in Canton, Ohio. They wanted to offer me a job working in their Research Library, so they contacted Steve to see about talking to me about the job.

It was pretty similar to my job at Films, doing research in their Library. Once Steve got off the phone with the Hall he came down to my small office in the back of the building at 330 Fellowship Road in Mount Laurel, New Jersey. What CEO would come to the office of a first-year librarian? He told me about the offer. He knew that I was from Ohio (close to my family) and that I loved the history of the game. But he saw something in me that nobody else did. Someone worth keeping. He offered me a small bump in pay and a new title. But that didn’t matter to me. What mattered is that he took the time to talk to me. From that moment I never wanted to let him down. I wanted to work as hard as could because he wanted me to a part of his company. So, I stayed.
2nd) A year or so later in one of our casual conversations we started talking about football memorabilia. A passion we both shared. At this time there was a big sports memorabilia show in Fort Washington, PA- the Philly Card Show- that was held several times a year. Once out of the blue he asked me if I wanted to go with him to one of the shows. I told him that would be great but I don’t drive. At this time I didn’t have a driver’s license. He said that’s okay I’ll pick you up. I was living in Moorestown, which was just a short drive from where he lived, so it wasn’t too out of the way. But it shocked me that the President of NFL Films would volunteer to pick me up and drive me to a sports memorabilia show. It was another example of his unselfish generosity.

He was a special person. I’m so proud to have meet him, worked for his company, to have had a RELATIONSHIP with him. Besides my parents, he has done more for my career and life than anyone I’ve ever meet.

Can’t be more happy to see him get elected to the Pro Football Hall of Fame. A honor so deserving.
Posted by cdw83 at 8:58 AM