By John Turney
____
Edit: 1/23/20
Some on Twitter have asked about Andrew Luck. Clearly, we could be wrong, but we are not 100% sure he's permanently retired. If he is still retired in another year, then yes, of course, he will be the First-team quarterback. And maybe it is wishful thinking on our parts. If his issue were concussions then that would be on thing, but he may heal up and get the desire to play again. Again, this is nothing but our speculation.
____

Longevity, according to football literature of the time, was a part of what was desired in a Hall of Fame resume. Over the years we marvel at football players who played 16-, 17- or more seasons and did so at a high level.

In the 1990s there was a mighty debate over Dwight Stephenson's qualifications. He was All-pro plenty, even a five-time winner of the NFLPA AFC Lineman of the Year award but he played just nine seasons. We clearly remember the debate when both Stephenson and Mike Webster were on the final 15. In 1996, when neither was inducted after a lot of debate "in the room" we spoke to Will McDonough. When we asked about Webster he shook his head and lowly muttered "Seventeen years".

Those who supported Stephenson finally made the case that if a player's career was cut short it should not count against him, since it was a matter of chance as to had a career-ending injury and who did not. It could happen to any player in any game or practice.

That exception has been loosely known among many researchers and Hall of Fame fans as the "Gale Sayers exception"—the exception to the rule of reasonable longevity. Sayers was known for his great career that was cut short by knee injuries.

The 'Sayers exception' came up with the case of Terrell Davis who played at an MVP level for more than a year and had won Super Bowls, but was felled by a severe knee injury. "The kn-ee. Al-ways, th-e kn-ee" as Howard Cosell used to say.

Last week Jimbo Covert, an All-Decade performer with a ring was inducted to the Hall in the Centennial class of 2020 and that should really help Tony Boselli.

In light of that we've picked a full team of players who played nine or fewer years, but played them at a high level. Some are Hall of Famers, some may be. Some will never be but we tried to pick the players with the highest peak. We also will list quite a few honorable mentions.

We began in 1960 because prior to that there were guys who retired from football to tend to their auto parts business or some such thing. Also, it's when the AFL began so we started there. 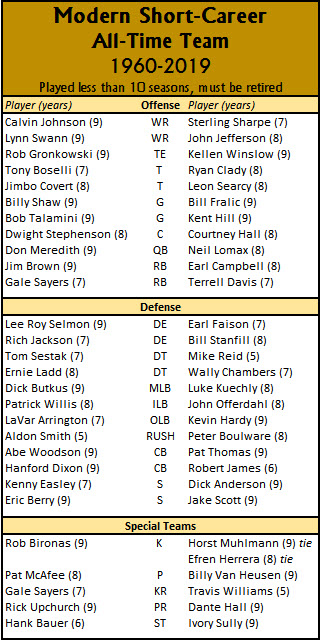 Honorable mentions—
we picked a lot, but only at positions where there was not a definitive First- or Second-teamer. So if we missed a wide receiver or a tackle it means there isn't much debate as to the top performers.

In one there is some question and it was a close call we list some alternatives to our picks.
Howard Mudd —A very good guard, smart. Went into coaching after NFL career.
Doug France—The NFL's top left tackle in 1977-78 and ranked high in 1979 and 1980 as well. Slowed by injuries but had a decent comeback in 1983 before hanging them up.
Bubba Smith—Top-notch from 1968-71. After his knee injury a shell of his former self.
Joe Johnson —Vastly underrated end good versus run and pass
Jerome Brown—Could be one of the top four tackles, a close call.
Bob Baumhower—A top NT, tall, but still had base. Could rush well from inside.
Bobby Boyd—One of top zone cornerbacks ever.
Shawne Merriman —Could get after the passer.
NaVorro Bowman—Solid in all areas as a 3-4 inside linebacker.
Otis Wilson—A rush backer in the Bear defense, but also did more than that unlike some of the rush backers of the day.
John Mobley —Would be a star today, could run and cover and hit. Very athletic.
Bob Swenson —A tough Sam 'backer. Bedeviled tight ends.
Mike Douglass—A Paul Zimmerman favorite. A smaller version of Otis Wilson in many ways
Mark Fields—Like Mobely, could really cover a lot of ground
Gary Green—Tough, feisty, talkative. Could also rush the edge on special teams.
Rolland Lawrence—A small, quick type. Not a big hitter like Pat Thomas or Gary Green. But solid in most areas.
Monte Jackson—Was the best CB for a few years, weight-lifted his way or of LA and to Oakland where he was never what he was as a Ram.
Miller Farr—A gambler, chance taker.
Kam Chancellor—Maybe the last of a kind, a "thumping safety". Rules have legislated his kind out of the NFL for good.
Jerry Gray—An excellent zone corner but also played slot and safety in different packages employed by Fritz Shurmur.
Bill Bradley—An excellent ball-hawking safety. The Eagles were not a good team and his post-season honors just didn't sustain in the mid-1970s.
Goose Gonsoulin—One of the top two-three defensive players for the first six seasons in the AFL, if there had been an AFL Defensive Player of the Year he would have been in the running a few times.
Mike Reinfeldt—Had a huge year in 1979 but was highly graded by one pro scouting service from 1977-81. Very underrated.
Posted by John Turney at 6:27 PM