By John Turney
Sometimes history has to be challenged and questioned. As the NFL was growing and gaining viewers and spectators the NFL media was also growing. And like the NFL they were gathering their sealegs and getting a lot right and some wrong.

For decades it's been reported that Elroy "Crazy Legs" Hirsch was the NFL's first true 'flanker'.  In a recent post we showed that was not accurate. He played some flanker when the right end was on his side, when the tight end was on the opposite side it was Tom Fears who was the flanker.

Another inaccuracy is the old yarn that Sam Huff was the NFL's first true linebacker. Or Joe Schmidt or Bill George. Wrong on all counts. The first true MLBer was someone else.

Coach TJ Troup wrote, "The Washington Redskins were the first team to use the standard 4-3 defense on virtually every down for a complete season making Chuck Drazenovich the first true middle linebackers".

Troup is someone who has the gravitas to make such a statement. He is the author of The Birth of Football's Modern 4-3 Defense: The Seven Seasons That Changed the NFL 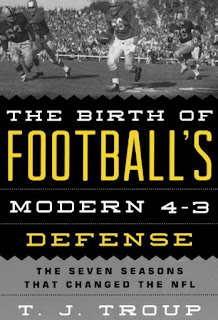 And because of a close friendship with now Hall of Famer Steve Sabol he had access to film that few have ever had and he made use of it by poring over those films and finding many things that defy conventional wisdom. He put that film study to use in the above volume on 1950s NFL football.

Back to Drazenovich. The 4-3 defense had been around for a while. One can see teams use it in the 1940s but none did it full time. They might employ it for a specific game or series. We've seen the Brookly Tigers use it some as well as other teams.

It began to creep into NFL defenses in the early 1950s and was becoming more common. But 1954 was a watershed moment. Both New York and Washington opened the season using it, thus making Drazenovich one of the first two "regular MLBers" along with John Cannady but the Giants didn't stick with it for the whole season, reverting back to the 5-2 they had used in previous years. So, at best, Cannady gets partial credit.

As for Huff, Troup's film study showed he began his career as a defensive tackle before moving to linebacker in his rookie season of 1956. The Lions and Schmidt and Bears with George (and others) migrated to the 4-3 in the mid-1950s, but it was Washington and Drazenovich who got there first and used the 4-3 for an entire season, from start to finish.
Posted by John Turney at 8:44 PM