By John Turney
Coach TJ Troup always throws out this challenge to major media types when he makes a claim, "Come on down to Louisville, Kentucky, I will put on a pot of coffee and some films and we can discuss what we see".

That's what Coach will say to those who challenge this assertion "Ed Sprinkle is not a HOF player". That's because the coach knows of what he speaks and can prove it through the great teacher: game film".

Ed Sprinkle was one of the 2020 Centennial Class Hall of Fame inductees announced yesterday and he may be the weakest choice. We just simply cannot agree with Papa Bear Halas. Halas referred to Sprinkle as "the greatest pass-rusher I've ever seen" and "a rough, tough ballplayer, but not a dirty one." The "rough, tough" sure. We agree. "(G)reatest pass-rusher"? We cannot. There is too, too much evidence to the contrary and even George Halas is not above being questioned.

Halas must have had his eyes closed when Len Ford or Gino Marchetti or even Doug Atkins was on the field because PFJ has seen a lot of film on Sprinkle and he is just not a dominant rusher, down-in and down out.

He was an arc rusher, coming wide from what might be called a 'cocked 9-technique' and didn't really vary his charges. "He never used his inside shoulder to take on a tackle and rush tight to set himself up for an inside move". He was good, even very good at times, but Hall of Fame? No. He was a smaller guy (6-1, 207) and did have some thick calves and some natural strength but Troup states, "He was neither quick nor fast, even for that era".

Additionally in an era that was run first, Sprinkle was a liability. "In the early 1950s the Rams just feasted in the run game by running off-tackle on Sprinkle. Dan Towler and Tank Younger just ate him up.". To be fair Troup suggests that Clark Shaughnessy's "mystical defenses" couldn't have helped. But in 1956, when "Atkins was there and the Bears were in the 4-3 they stopped those off-tackle plays to the left".

The numbers back up Troup's assertion if anyone cares to look them up. In 15 games during the peak of Sprinkle's career then Rams ran for over 2,100 yards thus showing what Troup saw on film is backed up by the gamebooks.

Again lest anyone get mad, it is not that Sprinkle was not good, he was good, but this is the Hall of Fame, it is supposed to be the best of the best.

Sprinkle made the 1940s All-Decade team even though he made All-Pro only in 1949 (by INS). Then he was First-Team All-Pro by New York Daily News. And then was Second-team in 1951, 1952 and 1954 by major organizations UP and AP. Essentially a two-time All-Pro by a pair of semi-major organizations. He also went to four Pro Bowls.

So when looking that those honors,  two-time All-Pro, four-time Pro Bowler his honors are light. What that means is the media of the day preferred other players in general over him as the best of the best. Was Halas not promoting his guy? Did they not listen if he did promote his guy?
We've posted about there are inherent issues with All-Pro/Pro Bowl teams, some guys get perhaps an honor or two and the end of their peak years and perhaps get shorted at the beginning. That happens and we recognize that. It does not seem Sprinkle fits that narrative. Mainly because he never had a real "All-Pro" run where he was a consensus All-Pro—a defensive end considered one of the top two in the NFL

We admit Halas' comments carry a lot of weight. And we have to accept it as is. However, we get to ask what he was looking at when he picks his guy over contemporaries like Ford, Marchetti, Atkins and even Gene Brito or Jim Katcavage.  Norm Willey was far more conspicuous on film with real speed and quickness for his era. Even Bill McPeak and Jack Zilly looked as good, if not better, than Sprinkle. Sprinkle was just not that special on film. Or on paper.

Oh sure, the Blue Ribbon Committee did a great job overall, we even posted that opinion. But that does not mean they are infallible. Just because something goes through an excellent vetting system does not mean errors cannot be made.

We know how voting works, and that at the bottom of any plurality votes there are players getting two or three or votes beating out someone who perhaps get one or two votes. That's the way voting distribution falls. And that could have happened here.

So, if anyone takes this as a criticism of the committee please don't. They did a fine job. It's just that we are free to criticize and scrutinize their work just as many of them (writers) made a living scrutinizing the work of players and coaches. And the general management/coaching types make a living doing that to players, who should be drafted or traded or cut.

So, 99% of those men and women can take the criticism (if any) professionally. Maybe not all but the vast majority will. What we hope is they don't descend into personal attacks on us or pull the old illogical "appeal to authority" argument of "we know more than everyone or committee was stacked with the best minds so don't dare criticize us".

That won't work here. We've seen the film, we know what's on it. We know the record books, we know what's in therm. And if we see a mistake, we will say it. And if anyone wishes to debate Coach Troup or anyone at Pro Football Journal, we'll take the challenge. You see, we KNOW, we make mistakes and we KNOW we have tons to learn and welcome any opportunities to increase our understanding in the game we love.

It comes down to the fact that we know there are experts that were not on the Blue Ribbon Committee who didn't have a say and Coach TJ Troup was one of them. The man literally wrote the book on the 1950s that reads like an encyclopedia. So no committee, Blue Ribbon or not gets a free pass and as we stated, 99% would expect that. But we've seen some who apparently do.

It's not going to happen. If Coach Belichick were to ever be willing to discuss this or any issue, we'd listen and not say a word bit try to ask as many questions as he'd answer. But if he asked, "Do you think Ed Sprinkle is a Hall of Famer, based on what you've seen". We'd look him in the eye and say, "No, sir. Respectfully". 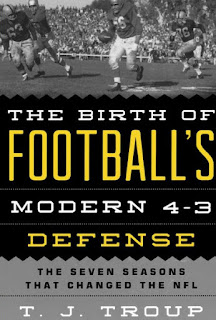 So while we don't know what exactly happened here as a good player got vaulted above his ability (ironically the same thing happened with the other Blue Ribbon Committee naming Doug Atkins one of the top seven defensive ends ever. Top 15? Sure. But JJ Watt, Willie Davis, Jack Youngblood, Carl Eller, and Michael Strahan all were better and had better careers than Atkins). And lest anyone the we are anti-Bear, Coach TJ states "I bleed navy and burn orange).

For time and memorial writers and now bloggers question the work of the Hall of Fame committees, and now the Blue Ribbon Committees. And as much as they work hard, vet, discuss, mistakes will be inevitable. And we contend that through the evidence of detailed film study and research this one one of them.

We welcome contrary views in the comment sections.
Posted by John Turney at 2:05 PM