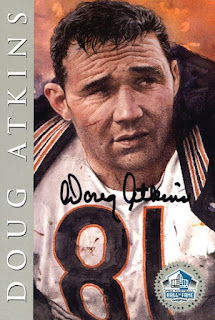 Bill Hewitt was also a surprise but we've noted before that there is not tons of data about him. There is some film but not much. So, we really don't have a comment on his selection.

Atkins, though, there is lots of film and lots of data available. If the Blue Ribbon Committee choosing the All-Time team availed itself of that information we cannot say.

For one, it took Atkins a long time to secure a starting job (he started 29 of a possible 60 games in his first five years due to injuries and inconsistent play). He was not able to get along with Paul Brown in Cleveland and was shipped to the Bears where he was a part-time starter for a couple of years.

In fact, Jack Youngblood, Carl Eller, Michael Strahan, and JJ Watt all got more All-Pro honors than Atkins and those honors include various Defensive Player of the Year awards.

So color us a bit surprised that Atkins beat out several players that were honored more, won more, and in some cases had better stats.

Of course, Atkins is an All-Time great, a legitimate Hall of Famer and though we will be criticized for this, it is not a criticism of his greatness. It's simply a deeper dive into information (film study, stats, honors, intangibles, testimonials, etc) as a way to separate the best of the best. Greater scrutiny is needed.

Atkins had rare size for his era (or any era) and was very athletic and we think perhaps the player personnel aspect of his career was given greater weight than his production. He was a wonder—good speed, great natural strength, and amazing leaping ability. All those things helped him in his pass rush. He was like Marchetti (a grabber and thrower) in terms of style, only he played the right end most of this career (he played some left end early in his career with both the Browns and the Bears).