The "He Changed the Game" Narratives are Getting a Little Thick

We've seen a bit of a trend in sports journalism, a narrative where players are credited with "changing the game". But we have not seen tons of film or game tapes that confirm these claims. This is one example (and there are others we will eventually get to).

On the above video Hall of Famer Ron Wolf makes the claim that Art Shell casued a changed the NFL because, he claims, that because Fred Dean couldn't beat Art Shell that the Chargers began to move Fred Dean around. And that Dean was the first defensive lineman to do that and therefore because Shell was so good that he forced that innovation, he forced the change.

(You can hear Wolf's comments beginning at 1:07 of the above video)

Now we have the ultimate respect for Wolf and his accomplishments. But we have to call B.S. on this one.

First, it doesn't show up on the films of the day.

Dean began as a left defensive end and played there in 1975 and 1976. In 1977 he moved to right defensive end, to Shell's side. So, did the Chargers send Dean into the lion's den? Why would they move Dean to Shell's side if he couldn't at least hold his own with the tackle he'd face twice a year who was on their rival—the team they'd have to beat to win the AFC West?

Additionally, in 1978, Dean had three sacks in one game against the Raiders. We all on Shell? We don't have full film of that game, but it's doubtful none of them came against the left tackle.

Second, in all the films I've seen of the late-1970s Chargers we've never seen him anywhere but the right end. That doesn't mean it didn't happen, but if it did it was not often enough to show up on the games and highlights we have seen.

Of course, Dean, when he was with the 49ers (especially in 1981) he  DID  move around. We've seen him mostly at right end in the nickel, but also at left defensive end, an much less often both tackles and on the nose, all in passing situations. In 1983 they experimented with him at linebacker in the base defense but that didn't last.


The thing is, Dean was not the first defensive lineman to move around in any event.

We think it was Rich Jackson in the late-1960s and early 1970s with the Broncos. The Rams toyed with it some. Deacon Jones and Merlin Olsen would sometimes switch positions to mess with the offensive line but it was rare.

No,  the guy who first did it in earnest (enough to show up on film and to be a 'thing') was Tombstone. We did a post about this a while back. It can be seen HERE. 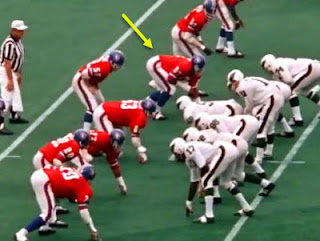 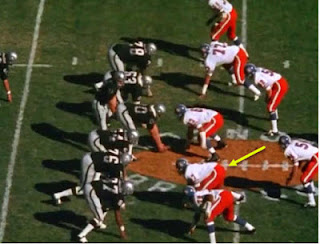 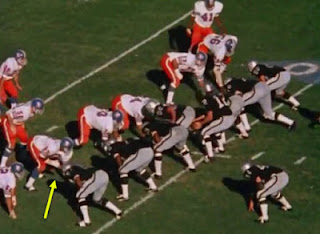 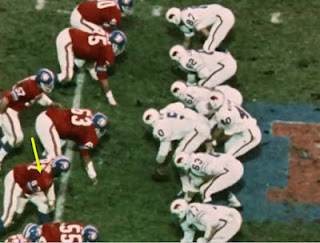 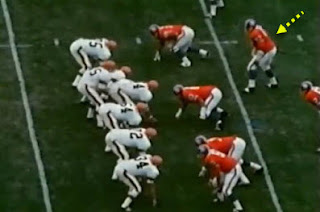 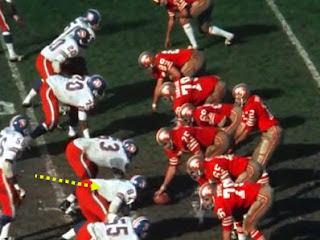 So, no disrespect to Wolf, everyone could learn volumes from him. But this particular story does not seem accurate on several counts. Dean was not the first defensive lineman to be moved around and we seriously doubt that "Dean couldn't beat Shell". Shell's All-Pro status and scout rankings were waning in the late-1980s while Dean's were rising.

Of course, if we could get some film of Dean moving around looking for a "weak sister" when he was with the Chargers, we'd love to see it and we'd be even more in awe of Wolf. But if it happened it wasn't often or we'd have seen it and that is why we raise the question.

Dean, when he was up for the Hall of Fame, was credited by a few as the player who innovated the designated pass rusher. That wasn't true either. Players had been doing that for over a decade when he was asked to do that in 1981 by Bill Walsh.
Posted by John Turney at 7:59 AM