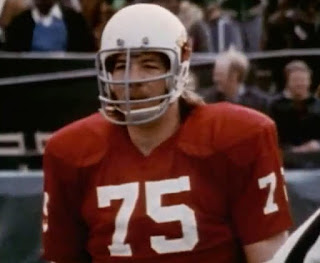 For years, former St. Louis Cardinals defensive tackle Bob Rowe has wondered why he has been listed as having played in the Pro Bowl in 1968, his second season in the NFL and first as a starter.

“If I went, I must have been suffering from a concussion,” he joked. The website, pro-football-reference.com, had him in that season’s Pro Bowl, as did the Cardinals media guide.

Rowe will be inducted in the St. Louis Sports Hall of Fame Monday night (Nov. 11) and because it will be my honor to present him, he insisted that no reference be made to that Pro Bowl when we talked recently. When he was presented with a plaque this fall that will be displayed at his high-school field in Flushing, Mich., a story in the local paper mentioned the phantom Pro Bowl. All the details made me eager to get to the bottom of the story.

Rowe said, “I don’t want misinformation out there especially when you’re with other professional football players that you played with. Maybe they know or don’t know, and maybe they don’t care. But I do.”

In recent years, he had family members try to set the record straight, but nothing was done.

Meanwhile, he has often wondered if it was Dave Rowe, a New Orleans Saints defensive tackle, that was in that game. Coincidentally, Bob (43rd from Western Michigan) and Dave (53rd from Penn State) were second-round NFL draft choices in 1967 and they were born 28 days apart in 1945. They also both played in the East-West Shrine Game after their senior seasons and then the College All-Star game against the Green Bay Packers.

It now can be considered a mystery solved and record corrected. After researching the issue, it has been confirmed that Dave was in the Pro Bowl in 1968, the first season Bob was a starter for the Cardinals.

After communicating with pro-football-reference.com and the Cardinals, the website now credits Dave and not Bob with that Pro Bowl and the Cardinals have removed Bob from their list of 1968 Pro Bowlers.

One part of the mystery still unsolved is how he came to be listed in the team’s media guide. It turns out that Bob’s name wasn’t there for 36 years until it suddenly appeared in 2005! It is believed that someone saw Bob’s pro-football-reference.com record that included the Pro Bowl and contacted the Cardinals, who then added it without doing further research.

Meanwhile, living now in North Carolina, Dave Rowe had no idea this had been the case. He did confirm he was in the Pro Bowl and added that Tom Landry was the coach of the East team.

He also joked, “I would guess over the years as a player and broadcaster I have been asked 1,000 times or more if he (Bob) was my brother.”

As for that second season, Bob recalls being upset that he wasn’t starting during his rookie year. He approached defensive coach Chuck Drulis and told him, “I’m a second-round pick. I’m not a bench-rider. I don’t know if I want to come back to the team next year. He said, ‘Are you out of your mind? Next year, you will be starting.’” Drulis kept his word.

He missed only one game and two starts for the remainder of his career. 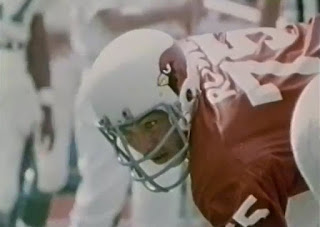 And, truth be told, Bob did have Pro-Bowl caliber years during his nine seasons with the Cardinals from 1967-75. He played 122 games, starting 111, and according to researcher John Turney, amassed 53.5 career sacks, which did not become an official NFL statistic until 1982.

Bob had 5.5 in 1968, which was third on the team, and 24.5 in his final three seasons, including 9.5 in 1973. Five times he led the team and tied for the lead once. That’s impressive on a team that didn’t have consistent pressure from their defensive ends.

He also had 9.5 blocked kicks in his career, including three blocked field goals in one 1972 game against the Baltimore Colts, which earned him an AP Defensive Player of the Week Award.

“I was always extremely quick off the ball,” Bob said, explaining his ability to penetrate for blocked kicks and sacks. “I could get to the guard and be off the ball as fast as any lineman in the NFL.”

That also helped him recover nine fumbles during his career. In 1969, he had two interceptions, one of which he returned 18 yards for a touchdown, according to pro-football-reference.com. That came on a screen pass attempted by Minnesota Vikings quarterback Joe Kapp. Bob remembered it being 19 yards, because he jokes, “If I caught it at the 20, I would have been stopped at the 1!”

His final three seasons coincided with Don Coryell’s first three seasons as the Big Red head coach, and the team made the playoffs in 1974 and ’75.

Bob has fond memories of Coryell.

He said, “He was a player’s coach. He put his players first. As a player, you couldn’t help but get excited because of his intensity; not wanting to let him down or his staff down. He was put on this earth to coach and be very creative and come up with the things that he did that turned offenses in the NFL around.”

He does, though, recall one quote from Coryell about his team’s defense, saying, “It’s Roger Wehrli and everybody else!”

Now, Bob Rowe isn’t just somebody else as a member of the St. Louis Sports Hall of Fame.
If truth be told, he is also a Hall of Fame man for always trying to set the record straight for the Pro Bowl that never was.

Howard Balzer has been covering pro football for 43 years and is a selector for the Pro Football Hall of Fame. He co-hosts the weekly Hall of Fame show on SiriusXM NFL Radio.
Posted by John Turney at 10:57 AM