Rams Defense Scores a Defensive Touchdown and a Safety and Lose.

Today the Rams defense scored a defensive touchdown and a safety for the 12th time since 1940. They were 11-0 in such games until today.

Here is the chart and a review: 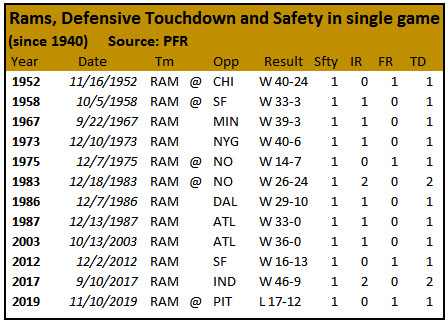 On  November 16th, 1952, Jack Dwyer recovered a fumble for a touchdown and Hall of Famer Night Train Lane caught rookie halfback Eddie Macon in the end zone for a safety.

In week 2 (October 5th, 1958) against the 49ers YA Tittle stepped out of the end zone under pressure and defensive end Lou Michaels scored on a short 6-yard interception return.

In the heydey of the Fearsome Foursome linebacker Jack Pardee had a 40-yard interception return for a score and Deacon Jones sacked Joe Kapp for a safety.

In 1973 the Giants snapped a ball out of the end zone for a safety and All-Pro outside linebacker Isiah Robertson picked off a pass and returned it 49 yards for a score in a 40-6 win on Monday Night Football. Purists might not accept this one because the bad snap was not really a defensive safety, more of an unforced error by the Giants
In 1975 Jack Youngblood sacked Archie Manning for a safety and Jim Peterson recovered a fumble on special teams for the score. However, this one is a big asterisk because Peterson's recovery was of a loose ball that was fumbled by the Rams punt returner so technically it does not quite fit.
In 1983, in Week 16 both the Rams safeties (Nolan Cromwell and Johnnie Johnson) had a pick-six and Youngblood sacked Ken Stabler for a safety in a 26-24 win to secure a playoff spot.


Gary Jeter got the sack for a safety in 1986 and LeRoy Irvin had a 50-yard interception return for a touchdown.
The next year Rams safety Michael Stewart tackled Falcon punter Rick Donnelly in the end zone and once again LeRoy Irvin had a pick-six. Again, Stewart's safety was on special teams so like 1973 and 1973 purists can take it out if they wish.

The Falcons were the victim in 2003 as Grant Wistrom and cornerback Travis Fisher's 74-yard interception return for a touchdown was the defensive score. Wistrom nailed a running back in the end zone for his safety in his final season as a Ram.
In 2012 linebacker James Laurinaitis forced Colin Kaepernick to be called for intentional grounding in the end zone and rookie cornerback Janoris Jenkins and a 2-yard touchdown on a fumble.
On the opening weekend of 2017, the Rams scored 2 pick 6s (Trumaine Johnson and Lamarcus Joyner) and Morgan Fox tackled Jacoby Brissett in the end zone for the safety. Brissett recovered a fumble by a running back and Fox touched him down in the end zone.
Today the safety was provided by a shared sack by Aaron Donald and Clay Matthews and the defensive touchdown was a scoop and score by Dante Fowler.
Posted by John Turney at 9:30 PM