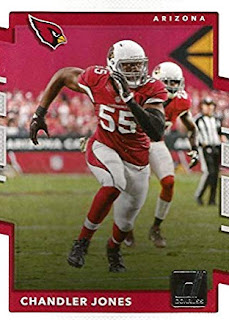 Certainly, everyone knows the sack leader for the last two-and-a-half seasons is. Has to be a dominant edge rusher like Von Miller or Khalil Mack, right? No. They are tied for ninth. 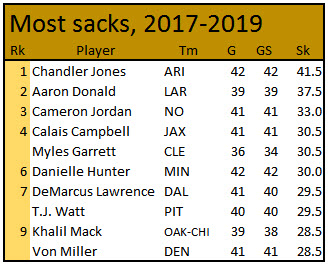 Jones is currently tied for the NFL lead in sacks this season and led in 2017 as well. But who knows it? He's quietly putting together quite a decade. Currently, he has 88.5 career sacks and has averaged 11 sacks a season since entering the NFL.

He's played both 3-4 OLBer (the nickel DE) and also 4-3 DE and in New England would een take some snaps inside.

He's a taller (6-5) rangy type, not the shorter, explosive types like Miller, Mack, or even Donald but he gets it done through a myriad of techniques, and hand usage. He does not really look as fast as he is for some reason. He's got good lean, has a good inside move and can fake tackles out with his hand moves.

Toiling in Arizona where they have been 6-19-1 over the past two seasons doesn't help in terms of publicity but next time you catch a Cardinals game, keep an eye out for Jones. He's a special player.
Posted by John Turney at 5:19 AM