Impact Player of 2019: Does He Continue to Make a Difference? 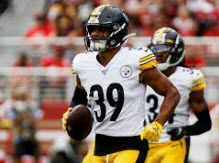 When a team believes it should not only qualify for the play-offs but should win their division and starts 0-3 there are no doubt issues/problems to be solved.

After three games opponent passers had completed 77 of 104 for 908 yards, with 7 going for scores with just 2 interceptions against the Steelers for a defensive passer rating of 114.6.

A trade had already been made to help rectify the situation; enter Minkah Fitzpatrick. Has any player in the league had more of an impact on his team than this young safety?

With Fitzpatrick, the last six games opponent passers have completed 130 of 216 for 1354 yards, with 8 going for touchdowns, and 12 interceptions for a defensive passer rating of 67.6.

Yes, everyone who knows me has heard me make the constant clarion call that the defensive passer rating is the key indicator of success on defense. This is a team stat and signifies that more than one player is doing his job (thank you Bill Belichick). The Black & Gold have forged their way into the playoff race.

The "experts/pundits" at SI just made their midseason predictions and NONE of them picked the Steelers to make the playoffs—and as I related online—if they are wrong there is going to be hell to pay. "You tell them I'm coming and hell's coming with me".

Why would Sports Illustrated pay any attention to a crusty old man who is helping shoot a football movie in Fort Worth, Texas?

The staff at SI has experts that all played defensive back at the college level, coached secondaries at both the high school and college level, have written books on the history of secondary play, and were all featured on Steve Sabol's show NFL Films Presents, right? Oh, none of them did?