No one expects NFL referees to be perfect. Mistakes by coaches, owners, players, and refs are part pf the game.

But, in an effort to make the game more offensive (see what we did there) the rules have been changed to favor the offense. And also, for player safety, which we are in favor of. All that is understandable and commendable.

However, beginning in the early 1990s, it is our memory that offensive players got to push off, at least far more than defensive players. In other words, offensive pass interference was rarely being called and there were players who made a living off of that, even made the Hall of Fame.

We think that has continued.

Is it unconscious by the official? Is it cognitive dissonance to the rules? We don't know. We do know that the game has to be fair. And that defenders should not be called for something and the offensive player not called for the same thing or worse. We think that happens. A lot.

We will show one example.

Zach Ertz did this and was not called— 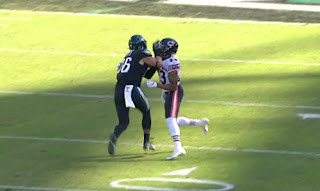 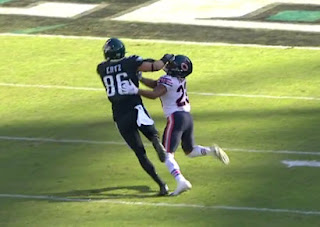 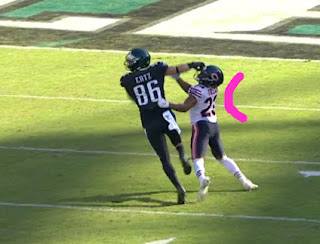 Sunday night Jason McCourty did this and was flagged— 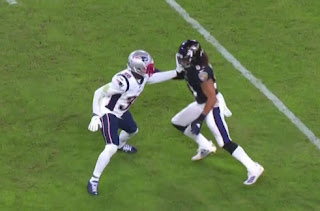 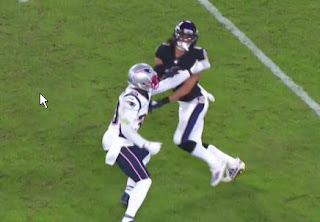 We get it. Different games, different crews. So skip all that.

Just get it right. McCourty did go to the face and the call was illegal use of hands. Fine. he did brush the face of the receiver.

But Ertz grabbed the mask, pushed to the point the defender's neck was arched. It could have been offensive pass interference, facemask or illegal use of hands, hands to the face.

Unless, that is, receivers are exempt from those calls. If they are, then we stand corrected.

Get it right NFL. That's all your fanbase asks.
Posted by John Turney at 3:37 PM