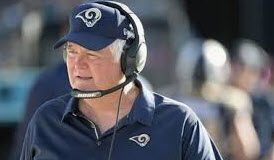 While the Rams offense is struggling to put points on the board, the defense is playing well, in general, though there have been a couple of games where they broke down.

Regardless, when you look at yards rushing per game and yards allowed per rush, the 2019 Rams defense is fifth-best in team history.

Here are the charts— 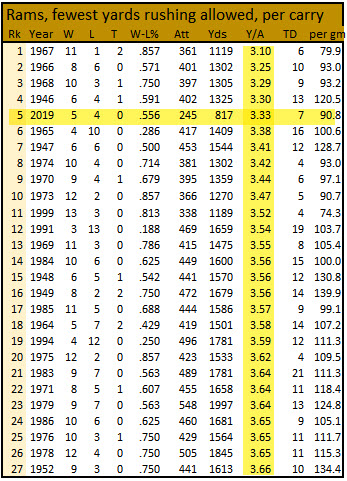 Being fifth in Rams history is saying a lot because the Rams have been known for defense and especially stopping the run in the era of the Fearsome Foursome and the 1970s iteration of the Rams defense.

So, while era matters, as in all football statistics, it is certainly noteworthy that with seven games to go Wade Phillips' run defense is among the best-ever in the Rams storied franchise.

As of this post, the Rams are allowing 90.8 yards rushing per game and 3.3 yards per rush.

As for the offense, there is a lot that that. But also following up on a previous post here are the final 16 games as a Ram for Kurt Warner and Sam Bradford plus the last 16 games for Jared Goff and how they compare. Goff's first 28 games under Sean McVay he had a passer rating of over 104 and had a 22-6 win-loss record and three 56 touchdowns to 16 interceptions with a completion percentage of over 63%. The past 16 games have not been as productive. 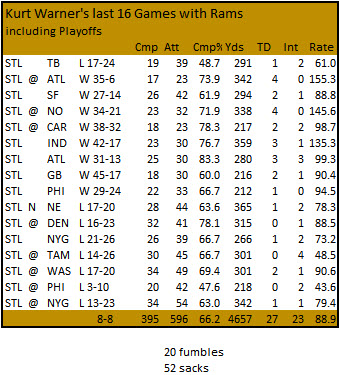 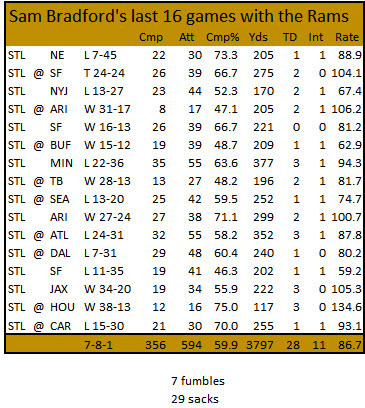 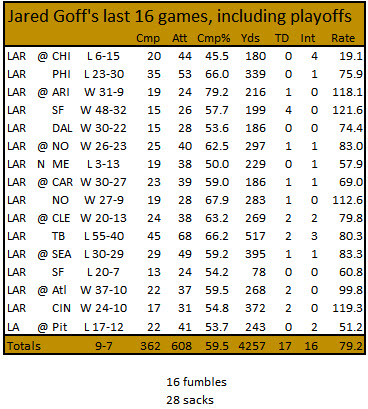 It is some food for thought in nothing else considering Bradford's name was Mudd to many Rams fans when he was traded away in 2015.