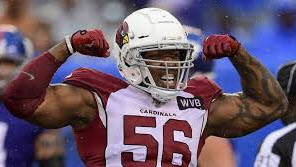 About three weeks ago PFJ did a post on Terrell Suggs remarking on how he's plugging along, racking up the numbers few know about.

With two run stuffs yesterday Suggs surpassed the century mark and now has 100.5 stuffs, a remarkable number in and of itself. But when coupled with his sacks it's doubly so. (A 'stuff' is a tackle for a loss that is not a sack)

In my research, only two other players have the double-triple—Bruce Smith and Deacon Jones.  Not bad company.

There are two other excellent two-way players on the horizon but it will take some good health.
JJ Watt is at 96.0 sacks 91.5 stuffs. Also, perennially underrated Calais Campbell could perhaps get there. He has 87.0 sacks and 84.0 stuffs.

Also of note:  Suggs has also passed two HOFers on the sack list in John Randle and Richard Dent, neither of whom had as many tackles, PD's, FF's or stuffs as he's had, so to me he's a sure-fire HOFer, probably not first ballot but if Jason Taylor is then . . . .

Here are his updated career stats— 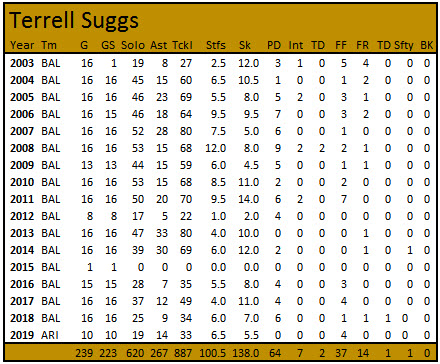