NFL/NFLGSIS 'Tackles for Loss' and 'QB Hits' Stats are Misleading

PERSPECTIVE
By John Turney
We've posted on this before, but it is a subject that needs consistent reminders. The main theme is this: NFL/NFLGSIS's  'Tackles for Loss' and 'QB Hits' Stats are Misleading are B.S.

Why? In short they double count. And also omit key plays.

Don't infer that we are attacking the Twitter account that posted it. We are not. They are posing the information the NFL releases and they are doing it accurately.

The issue is as we said twofold.

However, when they are clumped together, many (not all) writers and announcers infer that he would have 6 sacks and 9 other tackles for loss.

Also, the scoring can be odd.

Monday night on one play late in the 3rd quarter Demarcus Lawrence hurried the QB into an incompletion. He hit the quarterback and but the quarterback didn't fall down. As such he did not get credit for a 'QB Hit'.
Here is the play. 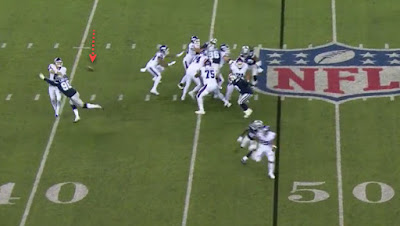 On that play the hurry or hit, whatever you want to call it affected the play in a way favorable to the defense. An impact.

Earlier in the game, Lawrence rolled at the feet of the of quarterback and the ge tripped and fell down. Lawrence did get credit for a 'QB Hit' on that play, even though it did not impact the play (it was a complete pass for a first down). 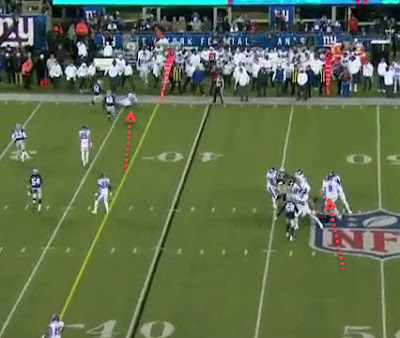 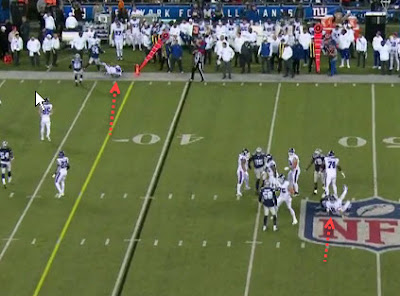 So, what exactly is the 'QB Hit' measuring?

Finally, there is the issue of forced fumbles. Now, while we get that it is 'technically correct' when a player sacks the quarterback bu forcing a fumble, he gets credit for the sack and the forced fumble but it does not count as a 'tackle for a loss' or a 'QB hit'.

Again, we get it, he didn't hit the quarterback, though sometimes they do on a strip-sack, and it wasn't a tackle for a loss because the ball is loose, but it does impact the 'stat line' of a player in a way that is deceptive.

Once again, what is being measured?

Here is the leaderboard for that season. 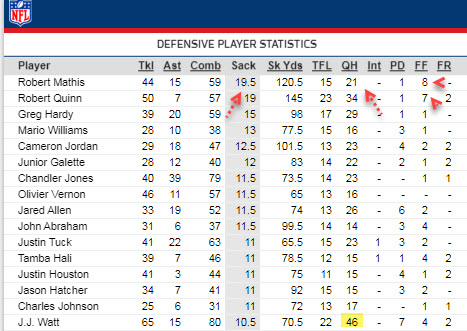 We would add sacks, whether they result in a fumble or not plus run stuffs (Mathis had 4.5) and have a total of 24 so-called tackled for loss. Or "Sacks plus Stuffs" (stuff being a tackle for a loss that is not ruled a sack).

We would also count sacks plus other QB knockdowns/Hits and include plays with a forced fumble. It would give a better perspective of what a player did—The purpose for stats is to measure productivity, not to be 'technically statistically consistent'.

Here are the stats from 2019. If Saquill Barrett hadn't have forced those 4 fumbles he'd have 13 TFLs and 18 QB Hits rather than 9 and 14. It makes a difference. A small difference, but a difference nonetheless. 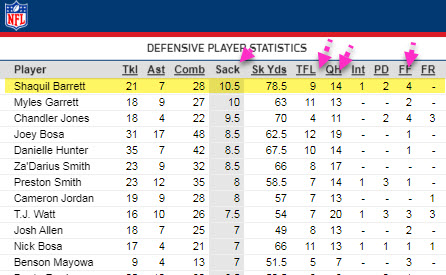 The only way a guy can get a sack, a forced fumble and a tackle for a loss is after the ball is loose, tackle the guy who recovers the fumble. We've seen it happen. Chris Long once sack a QB, and he went to the ground (no QB hit) but on the way down the ball popped out. The opponent recovered the ball and Long touched that player down. Sack, a forced fumble, tackle for loss.

But did the extra stat, the touching down of the guy who fell on the ball really amount to anything worth measuring? The great play was the sack and forced fumble. And had Long recovered it, it would be meaning full and he gets credit for that. It's a possession change. But touching down a QB who recovered his fumble, is that anything?

So, we maintain that when you see a stat line of two tackles, two sacks, two tackles for loss and two QB Hits. All of those are the same two plays. If you know that, then you understand what is going on. But if you think that is more than two plays, and you post that on Twitter, then it's not painting an accurate picture. That's all we are saying.

We can get to the old Paul Zimmerman point of if a QB hurry/hit matters if the pass was complete. That goes to the DeMarcus Lawrence section of this post and we can have that discussion another day.
Posted by John Turney at 1:38 PM