LOOKING BACK
By John Turney
A couple of years ago we posted the oddity that Rams running back Les Josephson wore two numbers in the same 1967 game versus the Cowboys. Today, it's Rams offensive linemen Rich Saul that we will post about.

Saul was drafted as a linebacker by the Rams in 1970 (he played that position at Michigan State) and was one of the best-ever special teams players in our view and was an excellent center once he locked down the starting job in 1975 going to six Pro Bowls. 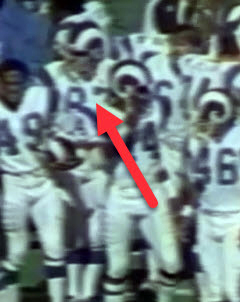 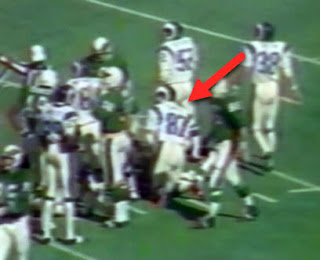 He also had a nickname of  "Supe" which was short for "super-sub" because he filled in at a lot of positions in his early years with the Rams. He converted to center, but also worked out at guard, tackle, tight end and linebacker, though he spent most of that time as a long snapper and backing up Ken Iman, even splitting time in 1973-74.

In 1972, In Week 5 against the Eagles, Saul wore number 87 when he was playing tight end and also weakside offensive guard. Later in the game, he wore his usual 61 when playing weakside guard.
As a 'weakside' guard  He is the guard away from the tight end. In 1971 and 1972 the Rams flopped their offensive line with Joe Scibelli and Harry Schuh on the tight end side and Tom Mack and Charlie Cowan alway away from the tight end. As such on any given play you might find, say Tom mack, as a left guard or a right guard depending on where the tight end was.

The flopping of the guards was unusual, we are not aware of any modern NFL team doing it, other than the 1971-72 Rams. It was something Rams Head Coach Prothro brought with him from college football, where was common at the time.

On this day Mack was nicked and didn't start with Mike LaHood taking his spot at weakside guard and in the course of the game Joe Scibelli was also nicked and then Mike LaHood filled in for Scibelli on the strong side and Saul for Mack on the weak side. 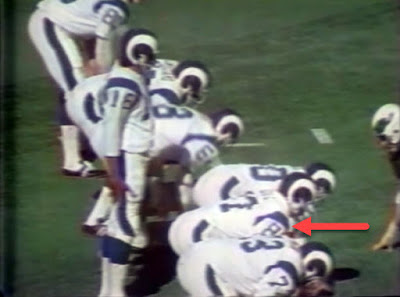 The red arrows point to Saul and his #87. 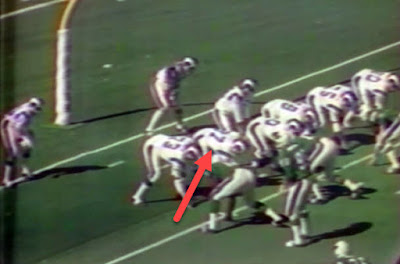 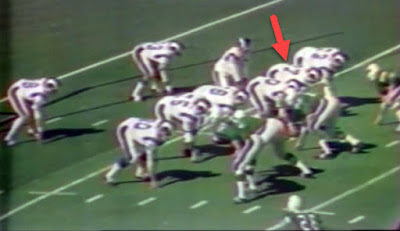 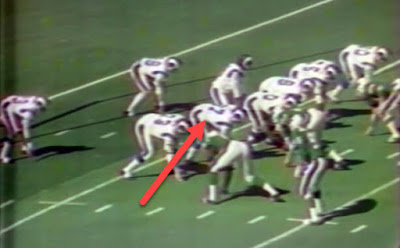 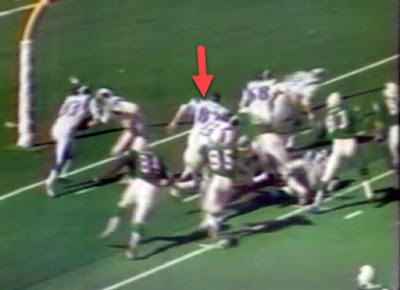 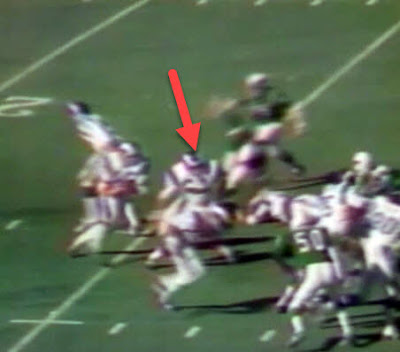 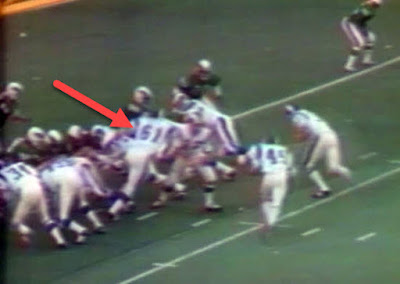 Why? Backup tight end Pat Curran didn't play in the game and Saul (Supe) was essentially the third tight end. Since he'd be in the game more than usual (being the second tight end rather than the third) it was likely smarter to have an eligible number. 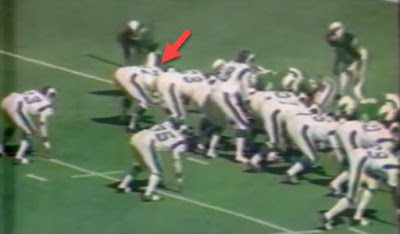 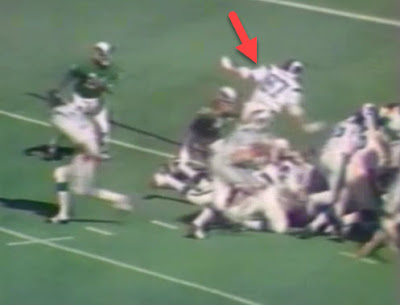 When Scibelli got hurt the Rams had to put Saul in at guard right away so he played guard with #87 and then early in the third quarter he switched jerseys to his usual #61. When he played guard with that number it was late in the game and the Rams had a big lead and if Saul were to go back to tight in short-yardage, he could just signal himself eligible. That is our surmise anyway.

If we find out more (such as if this happened in other games where Curran was out), we will update this post.
Posted by John Turney at 3:31 PM