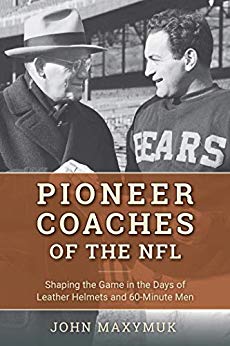 Yes, Virginia, there was an NFL before the advent of the Super Bowl.

Yes, Virgil, there is a book that provides a fascinating look at the game before it became ’s favorite spectator sport.

The NFL today is a multi-billion dollar entertainment giant. The game on the field is fast-paced and loaded with offense.

The Super Bowl has become an unofficial national holiday.

Fans are quick to credit those associated with the sport today for its overwhelming success. But let’s not forget the many others who created the foundation from which this colossus emerged.

John Maxymuk provides an answer in the preface of his latest book, “Pioneer Coaches of the NFL.”

“Coaches are the means by which the National Football League evolved and grew from meager and hardscrabble origins almost 100 years ago to assert itself as the most popular spectator sport in the . They are the men who devised, adapted, and altered the on-the-field stratagems that developed the game into the dramatic televised spectacle it has become.”

Maxymuk shines a light on 13 coaches – Guy Chamberlain, Curly Lambeau, LeRoy Andrew, George Halas, Dutch Sternaman, Ralph Jones, Potsy Clark, Steve Owen, Ray Flaherty, Jock Sutherland, Clark Shaughnessy, Jimmy Conzelman and Greasy Neale – and chronicles their influence on the game. He examines their life and career, the keys to their coaching, and the pivotal games in which they were involved.

That you might not be familiar with some of these names is reason enough to purchase this informative work.

From Maxymuk:
Each of these men was shaped by others in the business. Halas’ employed the T formation, an offense he learned while playing at under coach Bob Zuppke. Lambeau preferred the Notre Dame shift, an approach he picked up in his one year toiling for Knute Rockne.

Owen and Neale earned recognition for their defensive prowess. To defense the Cleveland Browns, Owen came up with what amounted to a 4-3 defense that is still in use today. Neale preferred a five-man line – with two linebackers who chucked the offensive ends – in order to better pressure passers.

Most of these men won at least one championship as head coach. All compiled winning records while serving as headmasters in the NFL.
Maxymuk notes that many elements of the game today – the man in motion and screen pass, to cite two examples – owe much to one or more of these coaches.

Regarding the former, Maxymuk says: “While there might be nothing new under the sun in football, it can be accurately said that Ralph Jones was the coach who made the man in motion a central element of the T formation.”

Regarding the latter, Maxymuk says: “He (Flaherty) devised a behind-the-line screen pass for his single wing attack before the championship game in 1937, to combat the heavy rush his rookie passer, Sammy Baugh, was encountering.”

Even talking trash, something found in abundance today, is nothing new. Consider this from after his Spartans endured an early, bitter loss to the Packers in 1932.

“You remember this, when you (Lambeau) bring your overrated 11 to , I’m going to beat you with 11 men,” declared. “I’m not going to make a single substitution to prove to you just how strong your team really is.”

made good on his promise. He did not substitute as his Spartans blanked the Packers 19-0 in an early December rematch.

Maxymuk concludes his look back with an Epilogue titled “Paul Brown: Modern Pro Football Coach” and an Afterword titled “Fritz Pollard’s Dream Deferred.” He also includes a Postscript called “Equivalencies” in which he compares these early coaches to some of their more modern counterparts.

Maxymuk is a reference librarian at . He has written more than a dozen books on professional football history.

“Pioneer Coaches of the NFL,” his latest work, is well worth your time.
Posted by Eric Goska at 6:56 PM