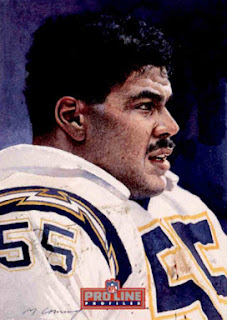 That is no way does it mean he's not worthy of his spot. He 100% is. We just think it's a bit of a "code cheat" to list him as an inside linebacker but then again Seau was a "cheat code" in nickel situations—he'd freelance all over the place—as a joker rushers (pick a hole) on the edge, mugging the line as a linebacker. He was remarkable.
Posted by John Turney at 7:03 AM